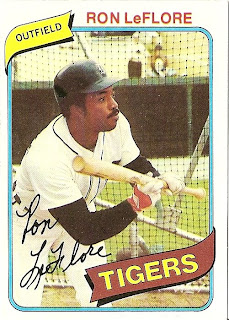 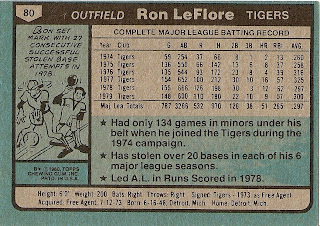 Who was this player?
Ron LeFlore, centerfielder, Detroit Tigers
A dominant offensive player for the Tigers, at the end of the 1979 season LeFlore had completed his third season in a row with 100+ runs scored, had batted .300 three out of four years, and finished in the top ten in five offensive categories in 1979. However, he was suddenly traded to the Montreal Expos in the offseason, primarily due to run-ins with manager Sparky Anderson on his approach to the game as well as an inability to settle on a new contract. His arrival in Montreal was widely seen as the final piece to the puzzle that would lead the Expos to the playoffs. While LeFlore led the NL with a career high 97 steals, he batted only .257 and missed time with hand and finger ailments. Montreal were edged by the Phillies on the final weekend of the 1980 season.

LeFlore's story is fairly well-known, thanks to a best-selling autobiography and a 1978 made-for-TV movie starring LeVar Burton as LeFlore. As a teen, LeFlore dropped out of school, was selling drugs and eventually convicted of armed robbery. It was in Jackson Prison where LeFlore first played organized baseball and he was discovered by Tigers manager Billy Martin in 1973. Martin arranged for a tryout at Tiger Stadium and within a year, LeFlore was paroled and immediately signed a contract with the Tigers.

He rose quickly through the Tigers system and became Detroit's centerfielder in 1975. He was the most exciting new star on a team that was old, slow and lost 102 games. The following year, he put together the longest AL hitting streak in 25 years when he hit in 30 straight games. Along with rookie Mark Fidrych, the pair rejuvenated interest in Detroit and both started in the All Star Game.

In 1977, LeFlore collected 212 hits and hit a career high .325. The following year he led the American League in runs scored and stolen bases while again fashioning the longest hit-streak in the league, this time 27 straight games. During this era, he was arguably the best position player on the Tigers and with his fame from the movie, used that to speak to at-risk kids much like himself. After his one-season in Montreal, he tested the free agent waters and signed a multi-million dollar contract with the Chicago White Sox.

Always outspoken, LeFlore immediately clashed with Sox manager Tony LaRussa over his playing time. The final straw came after the 1982 season when he was arrested. The White Sox revoked his contract and he never returned to the majors, ending his 9-year career. In later years, he made news for being arrested at the closing ceremony at Tiger Stadium for back alimony and again for the same charge in 2007. Despite this, LeFlore still longs to be involved in baseball in some capacity.

Why I love this card
Irony, thy name is LeFlore. One of the issues LeFlore clashed with Sparky Anderson over was bunting. As his leadoff hitter, Sparky wanted LeFlore to bunt more often to take advantage of his speed. LeFlore resisted and was openly defiant about it. And his card shows him bunting. Too funny. Also, card #80 of 1980 is a Detroit Tiger which is cool by me.

Something else....
This is the third straight card to feature a player that switched teams and were not with the team they are pictured with. This trend reminded me of the 1980 OPC set that did acknowledge the off-season moves, unlike the Topps set. Below is LeFlore's 1980 OPC card. If I had time, I would attempt a 1980 Traded Set, but I don't have the software to do something as creative as that.

Here are also the cards of Bob Owchinko and Ruppert Jones: