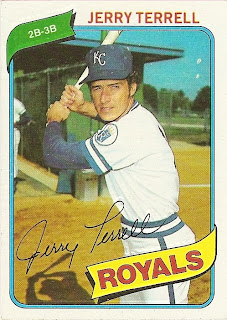 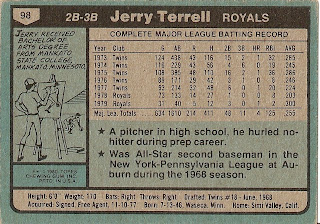 Who is this player
Jerry Terrell, utility, Kansas City Royals
A little-used utility player with the Royals, Terrell recalls fondly a game in 1979 in which he received two standing ovations in one inning. He batted .300 primarily as a backup for All Stars George Brett and Frank White. He split time between Triple-A Omaha and the Royals in 1980, appearing in 22 games, but only getting one hit. Even though he was not on the playoff roster, the Royals allowed him to be in uniform for the ALCS and World Series, even getting introduced in pregame festivities. It would be the last taste of Terrell's big league playing days, which ended after eight seasons.

Born in Waseca, Minnesota, Terrell was a rare player to play for the hometown team. He was a high school prep star, pitching no-hitters in high school and enrolling at Minnesota State University. Originally a Minnesota Twin, he began his major league career with a bang playing three infield positions (mainly shortstop) and was named to the 1973 Topps All Rookie Team. Terrell would spend five seasons in the Twin cities, mainly as a super-sub, ready to play virtually any position at a moment's notice. During his big league career, he played every single position, except catcher.

In 1975, Terrell had his best single-season batting average, but that was also the season he became a born-again Christian. He also had an important role as a guy who helped keep morale high in the dugout and in the clubhouse. He left the Twins after the 1977 season and joined the division champion Kansas City Royals via free agency. While he didn't fill in as much as his Minnesota days, he was just as valuable to the Royals cause. He spent three years in Kansas City and was the team's player representative to the ballplayer's union. He was the only player to vote against a player's strike in 1980 (for the '81 strike) because he believed it to be immoral.

He was released in 1981 but all his observations from the bench would lead to his next career opportunity. He managed and coached in the minor leagues and he eventually became the advance scout for the Montreal Expos. When teammate and friend Darrell Porter passed away in 2002, he acted as the family's spokesman to the media and delivered his eulogy. He remains a scout for the Royals today.

Why I love this card
I remember the pregame introductions of the 1980 World Series. I distinctively recall sitting on the shag carpet in front of the old Zenith console with all of the 1980 Topps Phillies and Royals. I would pull out each player as they were introduced and kept them sorted by lineup, pitching staff, bench. Those cards got a lot of wear that Series, but Terrell's stayed in pretty good shape.

Something else....
Midway through the 1979 season, Terrell broke his finger taking ground balls during infield practice. He was placed on the disabled list. Rather than replace him with an infielder, the Royals called up pitcher Dan Quisenberry, who remained with the Royals for ten seasons. Quisenberry used to credit Terrell's finger with providing his "break" into the major leagues.
Posted by Dean Family at 10:45 AM