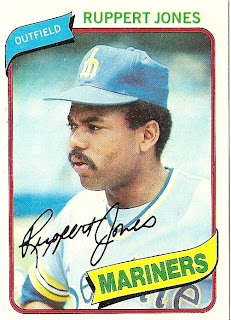 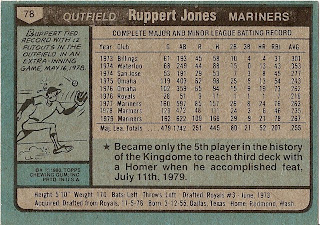 Who was this player?
Ruppert Jones, centerfielder, Seattle Mariners.
If you were opening packs of baseball cards in 1980, you would know that Ruppert Jones had already been traded to the New York Yankees and was no longer in Seattle. "Roop" had perhaps his finest season in 1979, playing in all 162 games and clubbing 21 homers. He showed his speed as well, scoring 109 runs and stealing 33 bases. The Yankees were looking to replace Mickey Rivers at the top of their order and tabbed Jones as the man for the job. However, Jones suffered multiple injuries that caused him to miss significant playing time (including the ALCS) as the Yankees won the AL East.

Jones was chosen by the Kansas City Royals in the 1973 draft and played in the Royals' minor-league system for the better part of four years. Upon being called to the majors, Jones singled in his first at-bat against future Hall of Famer Gaylord Perry. Later that year, the left-handed batting outfielder became the first selection in the expansion draft and was the original Seattle Mariner. His impact was felt immediately and he was selected to the All Star team that year. He was also the Mariners most popular player. During the 7th inning stretch, fans would sing "Roop, Roop, Roop for the Mariners." There were high expectations for Ruppert.

An appendectomy interrupted his 1978 season, and led to a second-half slump. His trade following the 1979 season was a shock to the Mariner faithful, but allowed Jones to play for a contender. However, management was not patient with Jones and he was traded to San Diego before the 1981 season.

In San Diego, Jones again was an All Star, this time in 1982. He was among the league leaders in batting for most of the first half that year. He tripled in his only All Star at-bat and scored in the NL's 4-1 victory. However, young prospects, most notably Tony Gwynn, reduced Jones' playing time in San Diego and the Padres did not resign him for the 1984 season. He signed with the Detroit Tigers, with whom he would win a World Championship. Platooning in left field, Jones hit .284 and hit 12 home runs, including bombs that cleared the roof at Tiger Stadium and hit the roof at Comiskey Park.

He signed a free agent contract with the Angels after the season and spent the next three years in Anaheim, predominantly as DH and right fielder. The Angels won the AL West in 1986, but Jones struggled in the postseason and the Angels lost the Series to Boston in seven games. After the 1987 season, he spent time in the minor leagues and Japan but never returned to the majors after a 12-year career. Today, he works for the Boon Group in San Diego, selling employee insurance benefits to government contractors.

Why I love this card
In addition to the Mariners' pitchfork M, Jones and I share a birthday. I remember being made aware of this fact on my front porch that summer when we all had cards out and Tommy B read the back of this card. I thought he was kidding. After all he was the same kid that tricked me into licking the top of a 9-volt battery ("It tastes like sugar") the summer before. An independent party (my Dad) confirmed it when I refused to look at the card as proof. I was a Ruppert fan from then on.

Something else....
On August 12, 1980, Jones hit an extra-inning walk-off grand slam to defeat the Chicago White Sox. On June 25, 1985, against Cleveland, he became the first player ever to do that twice in a career. It has since been matched by Jim Presley and three active players, Joe Crede, Carlos Lee and Alex Rodriguez.
Posted by Dean Family at 8:30 PM