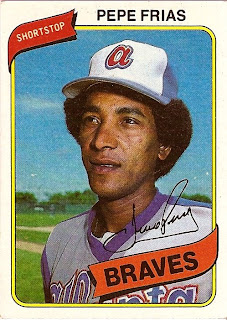 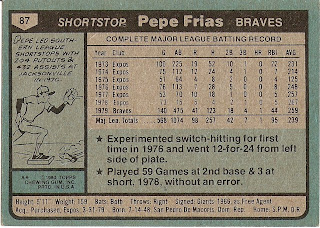 Who was this player?
Pepe Frias, shortstop, Atlanta Braves
Given the opportunity to be a regular for the first time in 1979, the switch-hitting Frias put together a solid campaign. Known mostly as a glove man, Frias hit his only home run that season and achieved career highs in every offensive category. However, he also committed 32 errors at short, the second most in his league. At the end of the season, Frias was traded to the Texas Rangers in a deal that made Doyle Alexander a Brave.

He was born Jesus Maria Frias in Consuelo, a sugarcane village near the larger town of San Pedro de Macoris in the Dominican Republic. The youngest of 15 children, his father earned $1.50 a day as a sugarcane worker and Frias left school in third grade to toil in a tractor shed near the cane fields. The family survived on food from its fruit and vegetable garden. For recreation, Frias, like nearly all Dominican boys, played baseball. It was in 1967 when he was signed by a San Francisco Giants scout for $500, money his family would live on for two years. After a summer playing in Class A, Frias was released. The next year, the Dodgers brought him to spring training but he was cut. The Giants signed him again in 1969, then released him again.

In 1970, Frias gambled on playing for a semi-pro team in Canada because "I was the only hope for my family." A Montreal Expos scout saw him and offered a contract but no money. In 1973, after three years in the bushes, Montreal brought him up and he immediately made himself valuable to the club by playing five different positions. He broke his nose in 1975, missing almost a month and batting a meager .125 for the season. The following season (1976), Frias taught himself how to switch-hit in an effort to remain on the club. The move paid off as his batting average raised nearly ten points the next three seasons. He never received regular playing time, however, and was typically a defensive substitute.

Traded to the Texas Rangers for the 1980 season, Frias began the season as the everyday shortstop. His batting average fluctuated all year, at one point reaching a high of .283 and a low of .222 in a little more than a month at midseason. He was traded in mid-September to Los Angeles when the Dodgers were in a hotly contested race for the NL West. Starter Bill Russell had fractured a finger and Frias was insurance for the stretch drive. He began the 1981 season on the Dodger roster but was released shortly after the strike, missing the Dodgers run to the 1981 World Series championship.

One of the first major leaguers to hail from the famous San Pedro de Macoris, he is one of the few stars to return to live in Consuelo. The town fathers were so grateful to have his presence here that they named the street where he lives with his wife and two children "Pepe Frias Boulevard."