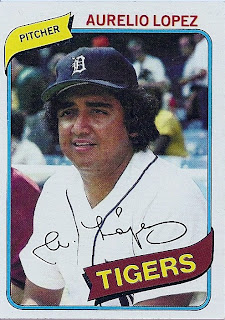 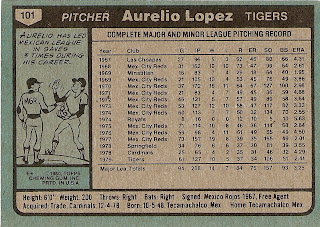 Who is this player?
Aurelio Lopez, closer, Detroit Tigers
Coming virtually out of nowhere in 1979, Lopez excelled in the closer role for the Tigers. Appearing in 61 games, he won 10, saved 21 and finished with a 2.41 ERA. He finished 7th in the Cy Young voting that year and "Senor Smoke" was suddenly one of the premier relief pitchers in the American League. He was penciled in for the same role in 1980. Lopez matched his 1979 output with 21 saves in '80, but his ERA was up a run and a half (3.77). The portly righthander could bring serious heat and was one of the most popular players on the Tigers at this time.

Before he became a star in the major leagues, Aurelio Lopez was a legend in the Mexican League. He made his professional debut as a 19 year old in 1967 and made his debut the following season with the legendary Mexico City Diablos Rojos. He was a starting pitcher for the first six seasons of his career, with moderate success. In 1974, he was converted to a relief pitcher exclusively and struck out 134 batters in 113 innings, while notching 20 saves and posted a 2.54 ERA. His season attracted the attention of major league scouts and his contract was purchased by the Kansas City Royals. It earned him late-season look, but Lopez did not pitch well in eight games, notching a 5.62 ERA.

Sold back to the Red Devils, he resumed his role as a dominant closer in the Mexican League. Lopez had his best and last year in the Mexican League in 1977, when he went 19-3 with 30 saves and a 2.01 ERA in 73 games. He struck out 165 and cut his walks to 49 in 157 innings and was named the league's Most Valuable Player. This earned him another look from the big leagues and his contract was sold this time to the St. Louis Cardinals. He served unspectacularly as a setup man in the Cardinal bullpen and at the end of the year was traded to the Detroit Tigers.

In 1981, he started to experience some arm trouble and lost the closer job to Kevin Saucier. He even made a few starts for the Tigers that season. He pitched well in a setup role but found his career in jeopardy when shoulder trouble ruined his 1982 season. He rebounded in 1983. Fully healthy, he was nearly invincible in the first half, with an ERA barely above a run a game. For his efforts he was named an All-Star and finished the season with 18 saves. In 1984, he teamed with Willie Hernandez to form a solid combination in the bullpen as the Tigers won a World Championship. Lopez in particular was outstanding, going 10-1 (the one loss coming after the Tigers clinched the division) with 14 saves and a 2.94 ERA.

1985 was his final season as a Tiger as Lopez saw his workload reduce and his ERA rise. Citing a desire to be used more, Lopez signed a free agent contract with the Houston Astros. He again served as a valuable setup man, winning three and saving seven for an Astros team that won the 1986 NL West. He played one more season with the Astros and his 11-year career ended when he was released in June, 1987. In retirement, he returned to Mexico and was elected mayor of his hometown. He died in a car accident in 1992 one day after his 44th birthday. Today, a statue in his honor stands in the town where he grew up.

Why I love this card
I smile every time I see a picture of Senor Smoke. And its not because of Ezzerhodden (one of you will get that joke). He was a popular player in Detroit where I grew up, partially because he had that great nickname. I love that the reverse side covers his Mexican League career and gives it the credibility it deserves. It opened my eyes as a kid that baseball was played elsewhere in the world outside of the major leagues.

Something else....
How's this for eerie - there have been three players in Major League Baseball history named Aurelio (Lopez, Rodriguez and Monteagudo). All three were killed in car accidents at a relatively young age (between 44 and 53).
Posted by Dean Family at 8:06 AM