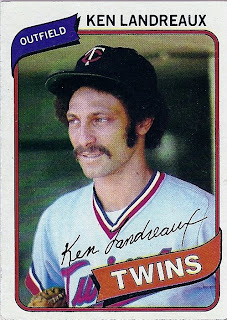 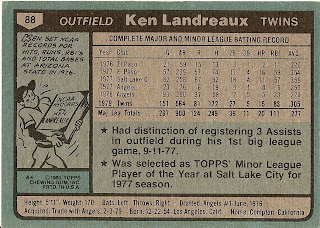 Who is this player?
Ken Landreaux, centerfielder, Minnesota Twins
As the centerpiece of the Rod Carew deal, Ken Landreaux spent his first season in Minnesota establishing himself as a rising star. Playing both center and left, he led the team in hits and batted over .300. 1980 started off even better for Landreaux. He put together a 31-game hit streak and tied a record with three triples in one game. His first half exploits earned him a spot in the All Star Game as the Twins lone representative. He was unable to maintain his hot hitting for the remainder of the year, but still finished with a respectable .281 average.

The left-hand hitting Landreaux was a product of Arizona State University at the same time of numerous other major leaguers and was the #6 pick in the 1976 draft. Ken played only two seasons in the minor leagues, 1976-77, before becoming a major league regular after he .357 with 27 home runs for two minor league teams in 1977. He came up to the majors originally in September 1977 and then appeared in 93 games for the 1978 Angels.

However, rather than provide Landreaux a raise, Twins owner Calvin Griffith did what he did with most of his talent during this era, and traded him to the Los Angeles Dodgers. Landreaux stepped into center for the Dodgers and provided them with a consistent bat and solid defense, but never again reached All-Star status. He helped LA to the postseason and caught the final out when the Dodgers clinched the 1981 World Series. He would become a fixture in center for Los Angeles for the next six seasons as the Dodgers won the NL West again in 1983 and 1985. He was a popular player and one of manager Tom Lasorda's favorites.

After his major league days ended, Landreaux played in the Senior League, was part of a lawsuit and recently assisted with the Urban Youth Academy and helped return baseball to the Compton Little League after a ten year absence.

Why I love this card
Landreaux's departure made me really hate the Twins for quite some time. Even though I pronounced it "Land-ree-ucks," it seemed they traded everyone on the team that was any good: Carew, Larry Hisle, Lyman Bostock, Dan Ford, Dave Goltz, Bill Campbell, the list seemed endless. When I asked my Dad why the Twins let all their good players walk away, the explanation was money. No wonder the following season my sympathies lay with the players during the 1981 Strike.

Something else....
Landreaux is the cousin of former major leaguers Dick Davis and Enos Cabell.
Posted by Dean Family at 10:12 PM