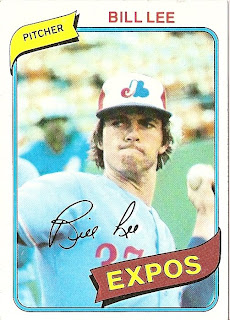 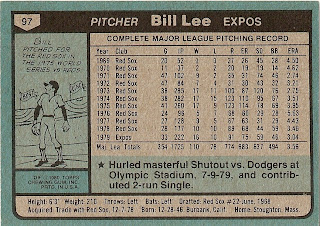 Who is this player?
Bill Lee, starting pitcher, Montreal Expos
Coming off his first National League season, "The Spaceman" finish the year with 16 wins (7th best in the NL) and 3.04 ERA (8th best). He was the #2 starting pitcher on a team that narrowly lost the NL East crown. 1979 was also the season that the left-handed Lee made headlines by proclaiming that he sprinkled marijuana on his pancakes, something alluded to in this interview. Lee was expected to resume his role in the starting rotation but began slowly. As he recounted in his autobiography "The Wrong Stuff"

...I passed a friend's house and decided to see if she was in. Rather than risk waking her by ringing her doorbell, I thought it best to climb up the facade of the house's outer gate, grab onto its awning and gently tap on her window. It was an older building, and when I pushed up to grab the awning, a brick broke and I began to fall. I grabbed a piece of wrought-iron trim to support myself, but it snapped. Falling over ten feet, I caught my left hip on a small iron fence below. I lay on the floor, curled in a little ball, unable to breathe.

Lee missed over a month of the 1980 season and pitched ineffectively upon his return. He finished the season 4-6 with a 4.96 ERA.

Rather than provide a write-up to Lee's career and current whereabouts, I will instead provide a link to the 2006 documentary, "Spaceman: A Baseball Odyssey. The first 20 minutes or so provide an excellent summary of his baseball career as well as his trip to Cuba. It's much better than anything I could write in five paragraphs.

More recently he was participated in the Midnight Sun game in Alaska.

Why I love this card
The older kids in the neighborhood all knew about the pancakes. Me and my friends my age had absolutely zero clue to what was so funny when we pulled this card from our packs. We didn't get it. I remember that there was something about him beyond being a decent pitcher, but it was done in a language that a nine year old did not understand in the summer of 1980. This card makes me think of how naive we were at one time.

Something else....
Warren Zevon (y'know, Werewolves of London) released a song named "Bill Lee" on his 1980 album "Bad Luck Streak." You can hear the song at the bigging of the documentary that I posted above.
Posted by Dean Family at 5:30 PM