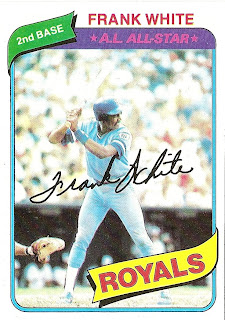 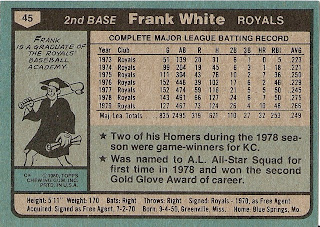 Who was this player?
Frank White, second baseman, Kansas City Royals
At the time this card was in circulation, White was the incumbent American League All Star and the premier defensive second sacker in the game. While he didn’t return to the All Star Game in 1980, White helped lead the Royals to their first World Series appearance and he was named MVP of the League Championship Series.

Frank White is the most successful graduate of the Kansas City Royals Baseball Academy - established by team owner Ewing Kauffman and run by Syd Thrift. The purpose of the Academy was to refine the skills of athletically-gifted prospects that had been neglected by other major league teams because they had not played much baseball in high school or college.

When he made his debut in 1973, he was seen as a good defensive player with limited skills at bat. Indeed, he won his first of six straight Gold Glove Awards in 1977. In time, White would hone his craft to become one of the important bats on a Royals team that won the AL West three consecutive seasons (1976-78) and was elected to the All Star Game for the first time in 1978.

He hit .545 in the Royals three game sweep of the Yankees in the 1980 ALCS, but Kansas City lost the World Series to the Philadelphia Phillies. He would hit 22 home runs in 1985 and 1986, helping the Royals win the 1985 World Series. In fact, White served as Kansas City’s cleanup hitter for most of the Series. During the 1986 All Star Game, his seventh-inning home run gave the AL a lead that they would not relinquish.

White has been decorated as one of the greatest Royals of all time, having his number 20 retired in 1995 and a statue erected of him at Kauffman Stadium in 2004. His teams won the AL West six times in his 18 seasons (all with the Royals). He is still ranked prominently on the Royals all time lists in every offensive category and his eight Gold Gloves is the team’s best.

Why I love this card
Here is our first All-Star card! I was always more partial to the individual player card having the All Star designation instead of the separate All Star subset that Topps did before and after 1980. I also think that this All Star designation is the best of its era. It doesn’t have the shield or star of previous editions or the bolder banners used before and after. Simple. Effective. It was always special to get an All Star card.

Something else....
After the end of White's playing career, he coached with the Royals and then the Boston Red Sox. He then managed the Wichita Wranglers for three years before moving in Kansas City's front office. In February 2008 it was announced that White was joining FSN Kansas City to serve as a part-time color commentator on Royals telecasts as well as an analyst on the channel's Royals Live postgame show
Posted by Dean Family at 8:38 PM