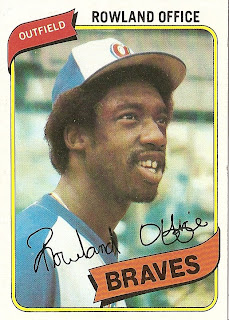 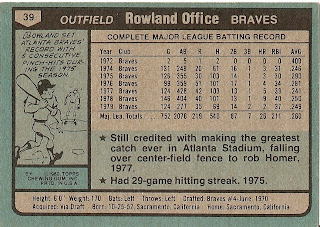 Who was this player?
Rowland Office, centerfielder, Atlanta Braves
At the time of this card’s release, Office had already left Atlanta and signed a free agent contract with the Montreal Expos. He was an exceptional defensive player who had been Atlanta’s starter in center for five seasons but was finding himself in a crowded outfield situation in Montreal.

Office was signed by the Braves in 1970 as a 16 year old out of McClatchy High in Sacramento. When he made his major league debut two years later at age 18, he was the youngest player to appear in the big leagues that season. After a return to the minors in 1973, a strong performance in spring training earned him a permanent spot on the Braves roster in 1974.

That season was also the year that Henry Aaron passed Babe Ruth on the all-time home run list and Office was designated to spell the 40-year old Aaron. 43 times Office finished games for Aaron in the field and 48 more times he took Aaron’s place in the outfield when the Hammer had a day off.

The following season, Office became the Braves starter in center and hit .290, a career high. He also set a team record with five consecutive pinch hits in September on the odd day he did not start. His 1976 season was highlighted by a 29-game hitting streak and his play in the field was being punctuated by several spectacular diving catches. A knee injury in 1977 saw his batting average drop by more than 40 points, but he returned in 1978 with a power stroke, achieving career highs in home runs (9) and RBI (40).

He played out his contract with the Braves and signed with Montreal after the 1979 season. For the first time in his career, Office played with a contending team in 1980 as the Expos lost the NL East on the final weekend. However, he did see his playing time reduced and he settled into a role as fourth outfielder and defensive replacement. The Expos won the NL East in 1981 and played in the NLCS, but Office was a minor contributor, playing in only 26 games. He spent most of 1982 in the minor leagues trying to reestablish himself, but appeared in only three games with Montreal that year and was released. After two games with the Yankees in 1983, his 11-year career came to an end.

Today, a blog inspired by Office makes its rounds on the Internet.

Why I love this card
On the back of this card, it talks about an Office catch in 1977 being the greatest in Atlanta Fulton County Stadium. A little research finds that the ball was hit by Mike Ivie, ironically the #1 pick of the 1970 draft. I have not been able to locate a picture or video of said catch, although it has been replaced by Otis Nixon as the ‘greatest’ catch in Fulton County Stadium history.

Something else....
I love the mini-themes that Topps has in this set so far. After the pinch-hitter homage earlier in the set, we now have recognition to defensive speedsters in the outfield. In the last six cards, three have featured a similar style of player (Scott, Torres, Office). Also, the tab is running on guys in this set photographed with one team and actually with another during the 1980 season (10 now).
Posted by Dean Family at 11:38 AM