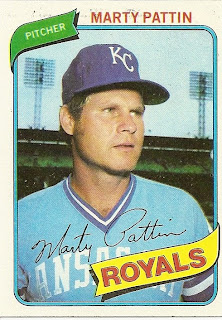 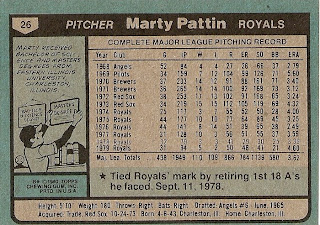 Who is this player?
Marty Pattin, relief pitcher, Kansas City Royals
Coming into 1980, Pattin was entering his sixth season as a valuable swingman on a very deep and solid Kansas City Royals pitching staff. Used mostly as a reliever, Pattin won 39 and saved 17 ballgames in his current stint with the Royals.

Much of Pattin's early life was detailed in Jim Bouton's book Ball Four. He was drafted by the California Angels out of Eastern Illinois University and made the major leagues during the 1968 season. He appeared in 52 games for the Angels, mostly as a reliever, posting an impressive 2.79 ERA.

He was drafted by the Seattle Pilots in the expansion draft, and Pattin holds the distinction of being the first (and only) Opening Day starter of the Pilots in 1969. The Pilots left Seattle for Milwaukee the following year and became the Brewers. Pattin was chosen to represent the Brewers on the AL roster in the 1971 All Star Game. At the end of the season, he was traded to the Red Sox in a blockbuster trade featuring Tommy Harper, Jim Lonborg and George Scott.

He won 17 games for the 1972 Red Sox and 15 in 1973. His 4.31 ERA was a bit high however, so the Red Sox shopped him around, nearly dealing him to Cleveland only to have the trade fall through. The Royals had been looking to add pitching and he came to the team in 1974. Pattin was a key pitcher on a Royals team that appeared in the ALCS for three straights seasons, 1976-1978. He helped the Royals finally reach the World Series in 1980 and retired after the season ended.

Why I love this card
Pattin's hat. In today's game, hats are either too big, too flithy or all feature the curved bill. Pattin is sporting the fresh-out-of-the box stovepipe hat look. And it appears to be during pregame! You won't see a shot of a current MLBer wearing a hat like this today. Unless it's retro night.

Something else....
Pattin has spent his whole life in the Charleston, IL area, starring at the local college, Eastern Illinois University. He not only had his number retired by the school, but he also has the only bar on campus named after him. Now that's an honor most players never achieve.
Posted by Dean Family at 12:17 PM