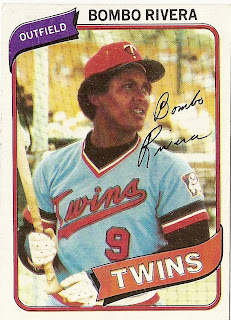 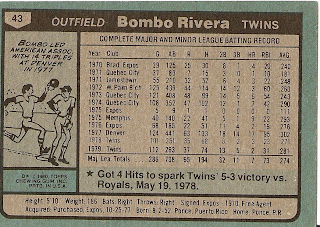 Who was this player?
Bombo Rivera, left fielder, Minnesota Twins
Jesus Manuel "Bombo" Rivera Torres claimed a starting position in the Minnesota Twins outfield in 1979 and would return in left in 1980. The Twins had lost outfielders Lyman Bostock and Larry Hisle to free agency and traded Dan Ford, enabling a position to open up for Rivera.

At the age of seven, his youth baseball manager started calling him “Bombo”, which meant “fly ball,” and the nickname stuck. Aside from baseball, Rivera was also an excellent athlete and musician. He was signed by the Montreal Expos as a free agent in 1970.

After several seasons in the minors, Rivera made his major league debut in 1975 with the Expos. After playing just five games in the majors for Montreal that season, he spent the entire season in the majors the following year, as part of a rotation of players tried out in left field. In 68 games that season, Bombo batted .276. He spent the entire 1977 season back in the minors, and in October his contract was sold to the Minnesota Twins.

The loss of Hisle and Bostock broght Rivera back to the majors in 1978 and he appeared in 101 games and batted .271. He achieved career highs in most categories in 1979, but and injury and a prolonged slump in 1980 saw him finish the season batting just .221. With the rise of several young outfielders in Minnesota (namely Gary Ward), Rivera was released during spring training in 1981. He was signed by the Royals shortly after his release, but he only appeared in five more major league games in 1982.

Bombo traveled to Japan with and joined up with the Kintetsu Buffaloes. He hit 31 home runs in 1985, but was released in 1986 after suffering a hamstring injury. In 1989, he participated in the Senior Baseball League. Today he lives in Mayagüez, Puerto Rico and works for a non-profit organization that offers sports clinics to disadvantaged Kids free of charge. He also stays close to Puerto Rican youth baseball by umpiring local games.

Why I love this card
Duh. His name is Bombo Rivera. The only Bombo in baseball history. Can't get any better than that.

Something else....
Despite his short career, Rivera did achieve a bit of cult status. In 1979, he received hundreds of write-in votes as president of student council at the University of Minnesota and he is mentioned in W. P. Kinsella's Shoeless Joe, the basis for the film Field of Dreams. However, that isn't even the most enduring. He was immortalized in song, The Ballad of Bombo Rivera. Bonus points if anyone can find me a copy of this song.
Posted by Dean Family at 8:19 PM