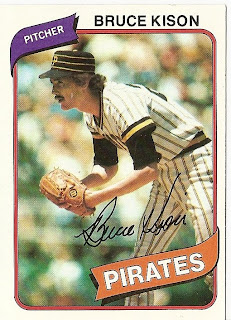 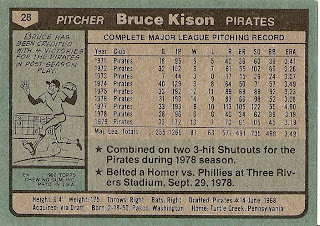 Who was this player?
Bruce Kison, starting pitcher, Pittsburgh Pirates
Kison had left the 1979 World Champion Pirates to sign a 5-year, 3 million dollar contract with the California Angles. The Angels were counting on Kison to be a significant part of their rotation to help ease the loss of Nolan Ryan.

Kison broke in the majors midway during the 1971 season with the Pirates. He would start 13 games (winning 6) and won the clinching game as a reliver in the NLCS against the San Francisco Giants. He won another game in relief in the World Series, a game that was also the first night game in Series history. The Pirates would defeat the Orioles in seven games to become World Champions.

In California, injuries wiped out most of his 1980 and 1981 seasons, as Kison won only 4 games in those two seasons. A healthy Kison would help the Angels claim the 1982 AL West pennant, with Kison getting a complete-game win in Game Two. In his career, he would post a 4-0 record in LCS play. He would also develop a repuation as a clutch pitcher, compling a 30-12 career record in September.

After two more seasons in Anaheim, Kison's contract was up and he signed on with the Boston Red Sox. He retired after 15 seasons and 115 wins. In retirement, Kison played in the Senior Professional League, was a minor league pitching coach in the Pirates organization and in 2007 was the pitching coach for the Baltimore Orioles.

Why I love this card
Sunday, June 1, 1980. Angels at Tigers. My dad brings me to the game early to watch batting practice, et al. Me being a Pirate fan, I wanted to get Kison's autograph since he was with the "Fam-a-lee" championship team. Kison is more interested in some fine young thing near the dugout and shoos a bunch of kids (me included). As soon as I turn away, my dad bellows "I BROUGHT HIM HERE TO SEE YOU KISON!" He ended up signing. The only time I have ever got an autograph through shame. Good thing too since the game was rained out.

Something else....
Kison was one of the principals in a bench clearing brawl with George Bell in 1985 that featured Bell doing a karate kid impression by kicking Kison in the stomach.
Posted by Dean Family at 9:57 PM