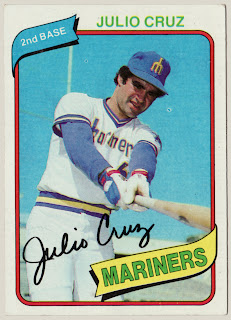 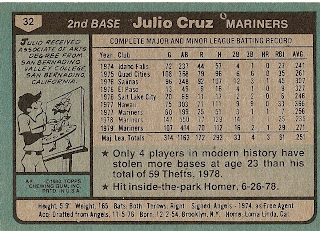 Who was this player?
Julio Cruz, second baseman, Seattle Mariners
An original Seattle Mariner, by 1980, the switch-hitting Cruz was a fixture at second. Typically the Mariners leadoff hitter, the sure-handed Cruz would steal at least 40 bases a season from 1978 to 1983.

An outstanding minor league player, Julio Cruz was picked from the Angels farm system in the 1977 expansion draft and joined the Mariners in July, hitting .256, stealing 15 in 21 tries and taking the second base job from Jose Baez. Ron Luciano called him out in a close steal attempt that year. When Luciano felt guilty about possibly making the wrong call for a rookie, he came up to him later in the game and said it was pretty close. Julio said "I'm just so happy to be here in the major leagues."

While he remained a Mariner regular, his batting average would fluxuate from season to season in Seattle, something that Cruz now says came from inconsistent coaching. During his time with the Mariners, Cruz says his "biggest thrill" was playing with Gaylord Perry. Manning second when Perry was winning his 300th game, Cruz says he kept thinking "[I]f the batter hits the ball to you, make sure you grab it on the dry side."

Midway through the 1983 season, Cruz was traded to the Chicago White Sox, where he would help the Sox with the AL West pennant. In fact, he scored the division-clinching run against his old team, the Mariners. He played in 160 that season and received a vote for AL MVP. He performed well in the ALCS against Baltimore, batting .333, but the Sox lost the Series in four games.

Inconsistency with the bat saw his batting average drop 30 points in 1984 and he lost his starting position the next season. He was released during the 1986 season after ten seasons in the majors. He became a Spanish language broadcaster for the Seattle Mariners after he retired and has been been co-coach, with former teammate Bill Caudill, of the Eastside Catholic High School in Kirkland, WA since 1995. He has also participated as a Mariners fantasy camp instructor

Why I love this card
This was the second of the 66 different cards that were double printed "DP" in the 1980 set. I believe that completely as I have six Julio Cruz cards currently and I remember destroying or defacing at least three more. It seemed like every pack that season contained a Julio Cruz. At least there is something you can count on.

Something else...
On display here is the greatest Seattle Mariner uniform ever. The "M" pitchfork on the hat, jersey front and sleeve is awesome. Add to that the polyester pull over jersey and the elastic waistband pants, and you have one of the best uniforms of the era. Or at least in the AL West.
Posted by Dean Family at 9:54 AM