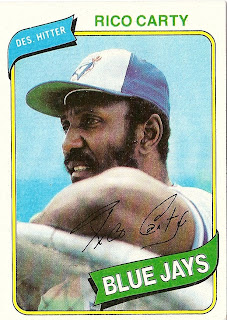 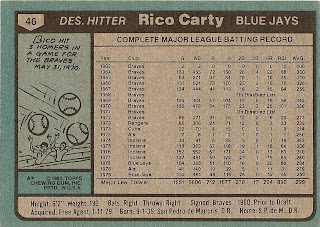 Who was this player?
Rico Carty, Designated Hitter, Toronto Blue Jays
“The Beeg Mon” as he was affectionately known throughout his 15-year career, Carty was at the end of the line when this card came out. In fact, 1979 would be his last season and he did not appear in a game in 1980. It was understandable for Topps to include him in this set, as that he was still under contract with the Blue Jays when the cards were released.

Born in famous San Pedro de Macoris, he was signed in 1959 by the Milwaukee Braves. In 1964 he made a splash as a regular outfielder, hitting .330 (2nd in the league) with 22 HR and 88 RBI. In spite of that, Dick Allen was the almost unanimous choice as 1964 Rookie of the Year. He became the Braves left fielder, but it was a challenge to match the success of his rookie season. It was also during this period that the Braves moved to Atlanta and also started to become a pennant contender.

In 1968, he was diagnosed with tuberculosis and he missed the entire season as well as the first month in 1969. He played an integral role in helping the Braves win the NL West that season and Carty played in the postseason for the only time in his career in 1969. He hit .300 in the series but the Braves were swept by the eventual World Champion Miracle Mets. In 1970, he became the first ever write-in starter in the All Star Game and he won the National League batting title, with a .366 average.

Just when it appeared that he made a full comeback, misfortune returned when Carty was stricken first with a knee injury and then with phlebitis, and he missed the entire 1971 season. He returned to the Braves in 1972, but Carty’s health caused teams to be cautious with him. He spent 1973 with three teams before landing in Cleveland in 1974.

It was in Cleveland where Carty would benefit from the new DH rule in the junior circuit. He hit his customary .300 three out of his four seasons with the Tribe, but injuries and conflict eventually led to his departure. He found a home in Toronto, with the newly-created Blue Jays and had a great 1978 season, hitting .282 with 31 HR and 99 RBI. His production dropped in 1979, but he seemed set as Toronto’s DH for 1980. His release late in spring training led many to wonder if it was a ploy by management to “send a message" to the Players Union. Carty was not signed by another team.

Why I love this card
Here is the first appearance of the “Des Hitter” on the position banner. At the time, it seemed as if Topps was very reluctant to specify a player as simply a DH and there are very few cards in this set with DH as the formal position.

Something else....
This card was Carty’s final card issue as an active player. For those of you keeping score at home, that makes three so far (Balor Moore and Rusty Torres were the others)
Posted by Dean Family at 3:12 PM