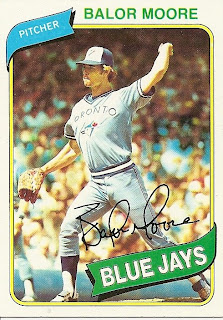 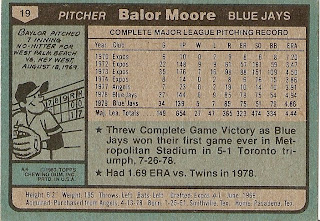 Who was this player?
Balor Moore, relief pitcher, Toronto Blue Jays
At this time, the Blue Jays were coming off one of the worst seasons in major league history. Moore was a 29-year old lefty that split time starting and relieving in 1979, but he figured to spend most of the 1980 season coming out of the pen.

Moore was the first ever amatuer draft pick of the Montreal Expos in 1969. The pitching-starved expansion team brought Moore to the majors in 1970 at just 19 years old. Clearly not ready at that time, he spent the next season in the minor leagues.

He credits his army service in 1971 to get him back on track. In 1972, Moore posted impressive rookie numbers and established himself as part of the Expos starting rotation. However, the Expos were still an expansion team, and his winning percentange didn't reflect that he was one of the hardest throwers in the game.

Moore began to experience arm trouble in 1974 and spent the next two seasons out of the majors. He caught on with the Angels in 1977 and the following year, another Canadian expansion team, the Toronto Blue Jays. He was part of the Jays starting rotation in 1978. While not the first player, Moore was the first pitcher to appear for both the Canadian teams. He retired during the 1980 season after 8 seasons in the majors.

After his baseball career, Moore left the game and began working at a steel company, which he bought in 1984, and owns today, Brittex Pipe Company.

Why I love this card
Another player in the first 19 cards of the set that didn't finish the season with the team he is pictured with. That's seven now (Braun, Sexton, Curtis, Pruitt, Cash, Narron, Moore). The picture here looks as if Moore is throwing the ball back to the umpire for inspection instead of firing in a pitch. It is also Moore's last card as a major league player.

Something else....
Much like the previous post regarding Ron Jackson, the Blue Jays have also adopted the retro-look lately as well. However, the Blue Jays have been wearing these at home, when looking at Moore's uniform in this card, they are clearly the road models they are emulating.
Posted by Dean Family at 10:33 AM