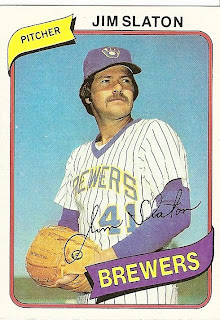 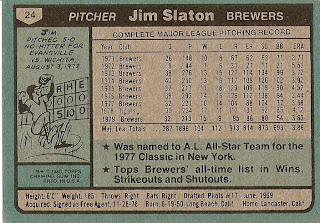 Who was this player?
Jim Slaton, starting pitcher, Milwaukee Brewers
Slaton was the #2 pitcher in the Brewers starting rotation; a team many predicted would contend in the AL East . At the time of this card's release, he was already the Brewers franchise leader in nearly every pitching category.

Originally a 1969 draft choice of the Seattle Pilots, Slaton rose quickly to the majors landing a spot in the starting rotation to begin the 1971 season. One of the youngest players in the majors, he posted impressive numbers in his rookie season, going 10-8 with a 3.78 ERA in 23 starts. Slaton faltered early in the 1972 season and was demoted to the minors after a 1-6 start.

Returning to the Brewers for good in 1973, Slaton established himself a mainstay in the Brewers rotation, winning at least 10 games and pitching at least 200 innings every year for the next five seasons. He even represented the Brewers in the 1977 All-Star Game. Looking to improve their offense, the Brewers traded Slaton to Detroit for outfielder Ben Ogilvie. It was in Detroit that Slaton would win a career high 17 games. As a free agent, Milwaukee offered him a large contract to return, so he was back in a Brewers uniform for the 1978 season.

After going 15-9 in 1979, injuries cut his 1980 season short. He returned to the Brewers staff in 1981 and helped lead the Brewers to the "second half" AL East title. The pinnacle came the next season; a Brewer appearance in the 1982 World Series. Slaton earned the win in Game 4. It was also during this time Slaton began a transition to the bullpen, primarily as a setup and long relief ace. After the 1983 season, he was traded to the California Angels. He would retire following the 1986 season after 16 seasons in the major leagues.

Slaton has stayed in the game through coaching at numerous stops in the minor leagues. As of 2009, he was the pitching coach for the Albuquerque Isotopes.

Why I love this card
While I am not a big fan of the staged shots such as this one, Slaton does get a nice plug in for his glove, the Wilson A2000. You have to look close and it's upside down, but its there. How's that for digging?