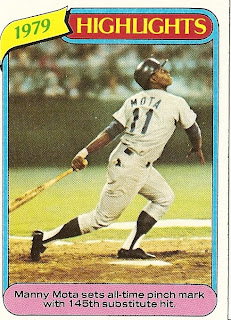 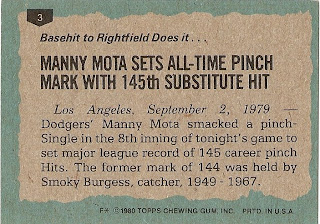 Who was this player?
Manuel Rafael Mota Geronimo, or Manny Mota. Mota's career was pretty much done by 1980 after he established the all-time pinch hitting record. 1980 was a big year for Manny as he was named as hitting coach for the Dodgers and achieved immortality in the movie "Airplane" when Ted Striker's voice was creating an echo.

Why I love this card:
This photo looks like it was taken at a night game. I cannot recall another card from this era something similar. Also the photo is a great action shot of Mota in full swing with his name and number in full view.

Something else...
I like how the back of the card even indicates the location of the record breaking hit, and the fact that Smokey Burgess gets mentioned by name.
Posted by Dean Family at 10:08 PM