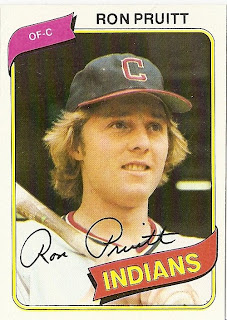 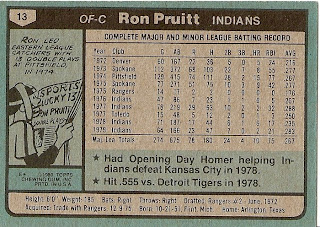 Who was this player?
Ron Pruitt, utilityman, Cleveland Indians
Pruitt was never a starter during his nine year career and by 1980 he had transitioned from being a backup catcher to a backup outfielder. He did not finish 1980 in a Indians uniform, however, being traded to the Chicago White Sox. In limited duty in 1980, he was batting .306 before his trade and finished the year with a career-best .302 batting average.

Pruitt was a standout at Michigan State University where he was an All Big Ten and All American catcher. He was drafted by the Texas Rangers in the 1972 amateur draft. In his first appearance behind the plate, he caught future Hall of Famer Gaylord Perry.

He was traded to Cleveland for the 1976 season, and he would spend the bulk of his career in a variety of roles for the Indians. Primarily, he served as a backup catcher and fourth outfielder.

Pruitt was released by the White Sox at the end of spring training in 1981 but rejoined the Indians. He signed a free agent contract with the San Francisco Giants late in the 1982 season, appearing in five games. He played one game for the Giants in 1983 before retiring.

Pruitt played in the Senior Professional Baseball Association in 1989 as a member of the Fort Myers Sun Sox. Today, Pruitt runs his own baseball academy for kids in the Akron, Ohio area, where he has been instructing for over 20 years.

Why I love this card
Nice use of the number 13 in the cartoon on this card - digging up an obscure minor league statistic to compliment the fact that Pruitt is the thirteenth card in the set.

Something else....
On Pruitt's website (another plug) he lists as a baseball highlight: