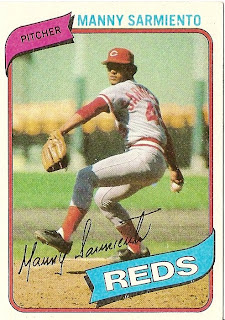 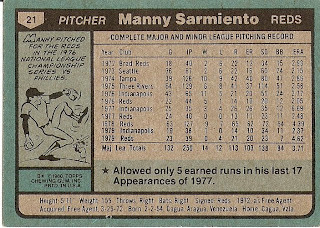 Who was this player?
Manny Sarmiento, relief pitcher, Cincinnati Reds.
A native on Venezuela, Sarmiento was part of the bullpen of the defending NL West Champion Reds. A week before the 1980 season began, he was released. At the time, major league players were striking against the owners and not playing spring training games. Sarmiento's teammate, All-Star George Foster, alleged in the media that the release of role players like Sarmiento was an example of ownership's strong-armed bargaining tactics.

Sarmiento made an immediate impact with the 1976 Reds as 20-year old rookie. Called up in mid-season, he appeared in 22 games, winning 5 and posting a 2.06 ERA. He did not appear in the Cincinnati's sweep of the World Series that year, mainly because the Reds were so dominant, but was on their playoff roster.

He was part of the Reds bullpen for the next three seasons as a setup man and middle reliever. After his sudden release, he signed a minor league contract with the Mariners before appearing in nine games late in the season. Manny was traded to the Boston Red Sox before the 1981 season, but he never appeared in a major league game for them. He was signed by the Pittsburgh Pirates prior to the 1982 season, and he logged in two solid seasons again as middle relief and setup man. Known for having a good singing voice, Sarmiento twice sang the National Anthem before a Pirates game.

After a 1983 season that saw him appear in 52 games and post a 2.99 ERA, he curiously never again appeared in a major league game, ending his seven year career. One possible reason arose in 1985 when Sarmiento was implicated in the Pittsburgh drug trials.

Why I love this card
Maybe it is the effect of the late 1970s. Maybe it's just poor selection by Topps. In any event, the team is called the Reds. As in the color. Yet aquablue on the player's name and team pennant and the position pennant is pink. At least the border is red.

Something else....
It is becoming increasingly clear why Topps decided upon a
"Traded" set in 1981. Here is yet another player in the opening stages of this set who was not with the team he is pictured with by the end of the 1980 season.
Posted by Dean Family at 7:09 AM