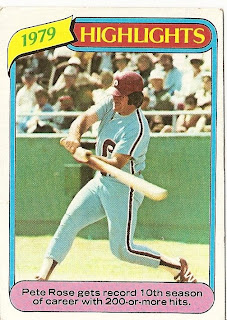 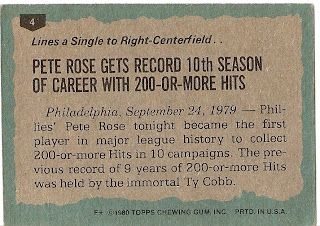 Who was this player?
Pete Rose, the all-time hits leader. The unfortunate demise of his legacy by his own hand has obscured if not outright dwarfed his achievements on the field. Take this card for example. 10 seasons of 200 or more hits? That's pretty impressive, considering he beat out Ty Cobb to do it. But don't look now - Ichiro has done it 8 times.

Why I love this card:
The Phillies toilet-water blue road unis on full display. I don't know why, but sometime during the late 1970s and early 1980s it was fashionable to trade in the road greys for this color, especially in the NL East. Chicago, St. Louis, Montreal, Philly all had them as did Kansas City, Seattle, Texas, Minnesota, Milwaukee and Toronto. That's 10 of 28 team folks, nearly half the teams.

Consider this too: the blue roads were considered conservative for the time with Pittsburgh, Houston, San Diego and Oakland all out there. There were a lot of color combinations out there. Consider the defending World Champion Pirates: 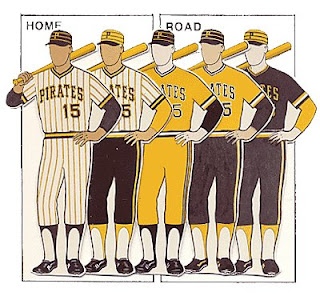