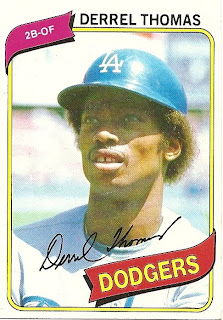 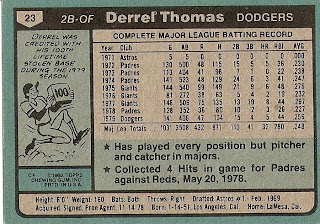 Who was this player?
Derrel Thomas, utility, Los Angeles Dodgers.
Thomas was an extremely versatile ballplayer appearing at six different positions for the Dodgers in 1979. In his career, Thomas would appear at every position but pitcher. His ability to play anywhere when asked enhanced his playing time and he was expected to fill a similar role with the Dodgers during the 1980 season.

Initially drafted #1 overall by the Houston Astros in the 1969 draft, Thomas was traded to the San Diego Padres before the 1972 season. Thomas immediately demonstrated his versatility by playing in five positions that first season, mainly at second base and shortstop. His ability to spell the regulars made him a conistent part of the Padre lineup for three seasons. He was traded to the San Francisco Giants in 1975.

During that season, Thomas enjoyed his first season as a starter as the Giants second baseman, posting career highs in sevearal categories. Eventually, however, he returned to his utility status with the Giants and the Padres (again) and Dodgers. In 1981, Thomas was part of the Dodger team that won the World Series. It was in Los Angeles that Thomas enjoyed his longest stay with any one team, five seasons. Thomas last appeared in a major league game in 1985, after 15 seasons with seven teams.

In 1992, Thomas was arrested in Los Angeles for attempting to sell undercover officers 22 pounds of cocaine for $140,000. At the time of his arrest, Thomas was the head baseball coach at Dorsey High School in Los Angeles. He eventually spent 47 days in jail.Thomas has used this life experience to help aid young people by joining Baseballers Against Drugs. He was awarded their Positive Image award in 2004.

Why I love this card
While I am typically not a fan of the simple head shots, this one has a unique look to it. I can't tell if the photographer surprised Thomas as I can't believe that this was a staged shot. Either that or Thomas just woke up. Always glad to see another appearance of the vintage batting helmets as well. A little foreshadowing here as that Thomas was also named in the Pittsburgh drug trials.

Something else....
Thomas appeared in the 1991 movie Talent for the Game. starring Edward James Olmos. He appeared as a California Angel, a team that he played with in 1984.
Posted by Dean Family at 6:16 AM