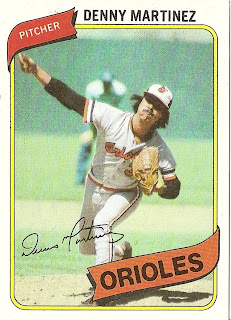 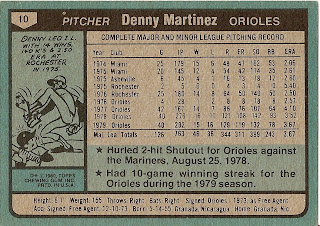 Who was this player?
Dennis Martinez, starting pitcher, Baltimore Orioles. Coming into the 1980 season, Martinez established himself as one of the key arms to arguably the best pitching staff in baseball. At 25 years old, he was coming off of two straight 15+ win and 275+ IP seasons and an appearance in the 1979 World Series.

Dennis Martinez was the first Nicaraguan-born baseball player in history. He was a durable pitcher who played for five teams (Orioles, Expos, Indians, Mariners, Braves) during his career. A four-time All Star, has the most career victories of any pitcher (245) who never won 20 games in a single season.

While Martinez would lead the league in wins in 1981 and post 16 more in 1982, the grips of alcoholism claimed two seasons before he could overcome the disease. Once conquered, a now-healthy Martinez returned to the Baltimore rotation in 1985 and was traded to the Montreal Expos in 1986. In Montreal, Martinez would win 100 games, the second most in team history. Immortality came on July 28, 1991 when "El Presidente" pitched only the 11th perfect game in Major League history against the Los Angeles Dodgers.

In 1994, he moved along to the Cleveland Indians and his veteran presence on the mound helped lead the Indians to the World Series in 1995. He finished his career as a setup man with the Atlanta Braves in 1998.

Why I love this card
Today, I don't even think of him as "Denny" but in the late 1970s and early 1980s all of his Topps cards refer to him that way. That, and the umpire looking over his shoulder while Martinez is in full huff-and-puff mode makes it all the more awesome.

Something else.....
On September 28, 1995, Martínez was the last man to pitch to the late Hall of Famer Kirby Puckett in a regular-season game. A wild pitch by Martínez broke Puckett's jaw; the following spring during Grapefruit League spring training, Puckett developed glaucoma in his right eye and never played again.
Posted by Dean Family at 9:49 PM