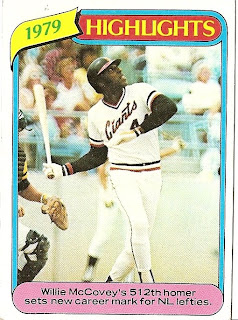 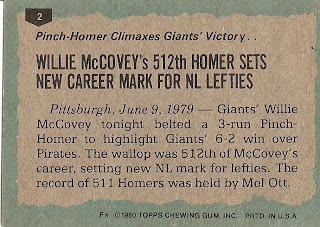 Who was this player?
Willie McCovey was in the twilight of a Hall of Fame career by 1980. However, during 1979, he joined the illustrious 500-home run club (when it was illustrious) and established the mark for most home runs by a NL left handed batter (as noted in the card). McCovey would retire midway through the 1980 season and was elected to the Hall of Fame in 1986.

Why I love this card:
Nearly a full body shot of McCovey in action. Showing off the all-white Giants uniforms of the 1970s, he appears to have popped this one up instead of blasting it out, but that's not the point.

Something else....
Pretty sure that the catcher barely visible is a Pittsburgh Pirate (again nice acknowledgement since he accomplished his "highlight" against the Pirates). However, check out the fan at the top of McCovey's bat. Are those 3D glasses, or is that Catwoman is attendance at this game?
Posted by Dean Family at 8:16 PM