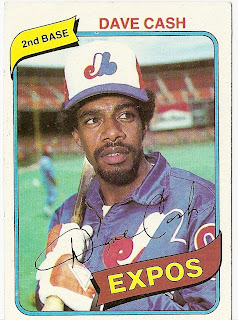 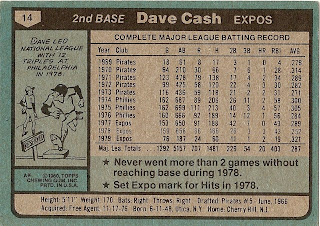 Who is this player?
Dave Cash, second baseman, Montreal Expos
Cash was a coming off a 1979 season that saw him lose his starting position. He batted well in a reserve role (.321) yet Cash left Montreal after the season and signed with the San Diego Padres for the 1980 season.

Cash, a career National Leaguer, broke in with the Pittsburgh Pirates in 1969 and was the leadoff hitter and second baseman for the 1971 World Champions. Cash established himself as a slashing, solid singles hitter with great speed and excellent defensive skills. However, the Pirates abundance of talent at that position (Rennie Stennent and a minor league Willie Randolph) made him expendable and he was traded to the Phillies prior to the 1974 season for Ken Brett.

Initially unpopular in Philadelphia due to fan reaction from the trade, Cash won over the fans by becoming an All Star and setting records in the process. He led the NL in at-bats all three of his seasons as a Phillie and established a since-broken record of 699 at bats in 1975. He also led the NL in hits (213), his second consecutive season of 200+ safeties.

After helping lead the Phillies to the NL East title in 1976, Cash tested the newly-established free agency waters and signed with Montreal in 1977. While not matching his previous All-Star status, Cash was a solid and dependable second baseman for a up and coming Montreal team. Manager Dick Williams benched Cash in favor of Rodney Scott in 1979, which led to his departure from the team. He played his last season in San Diego in 1980, wrapping up a 12 year career.

Dave stayed active in baseball, most recently in the major leagues as first base coach for the Baltimore Orioles. In 2008, he was the hitting coach for the league champion Sussex Skyhawks in the CAN-AM League.

Why I love this card
Cash is sporting the typical 1980 ballplayer look: stylish warmup jacket, two batting gloves, sweet goatee, the indifferent look away from the camera. And is that a subliminal Marlboro ad in the background? Aren't those illegal??

Something else....
Now that we have passed by the pinch-hitter portion of the set, the last four cards have featured guys that did not finish the 1980 season with the team they are pictured with. And what is up with the "Expos" flag on this card being brown?
Posted by Dean Family at 8:36 AM