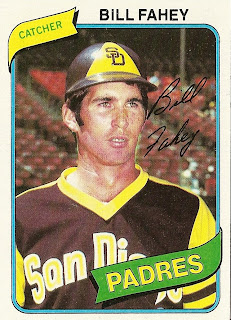 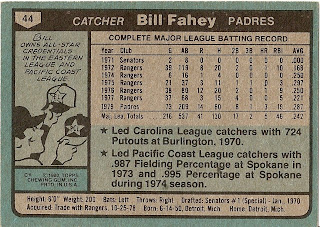 Who was this player?
Bill Fahey, reserve catcher, San Diego Padres
In 11-seasons in the major leagues, Fahey served as a durable backup behind the plate. 1979 was his first in San Diego, spelling Gene Tenace and he would resume the same duties in 1980. It was during 1980 in which Fahey reached career highs in games played, base hits and runs batted in.

A product of the University of Detroit, Fahey was drafted by the Washington Senators in 1970 and appeared in two games with them the following season. That year was the Senators final season in Washington and Fahey’s manager was the legendary Ted Williams. He traveled south with the team as they became the Texas Rangers in 1972.

He was given an extended look in the second half of the 1972 season, appearing in 39 games from mid-July, but batted only .168. He spent all of 1973 in the minors and when he would return to Texas sporadically the next four seasons, it was primarily to serve as backup to starter Jim Sundberg.

After spending all of 1978 either on the disabled list or minor leagues, Fahey was part of a trade that sent him to San Diego. After two seasons in California, the Michigan-born Fahey returned home, when his contract was purchased by the Tigers in Spring Training of 1981. Acting as Lance Parrish’s understudy, it was in Detroit that Fahey would begin the second stage of his baseball life.

When he retired as an active player in 1983, he was given a position in the Detroit farm system, as manager of the 1984 Lakeland Tigers. In 1986, he was asked by his former Detroit pitching coach, Roger Craig to serve on the San Francisco Giants coaching staff, where Craig was now manager. Fahey was a coach on a Giant team that won the NL West twice (1987, 1989). Today, his son Brandon is currently an infielder with the in the Toronto Blue Jays organization after three seasons with the Baltimore Orioles.

Why I love this card
Fahey's career stats include our first mention of the Washington Senators. Seeing that his season in DC matched the year I was born, naturally as a kid this was of interest to me. Funny to think now, but I didn't make the Rangers-Senators connection in 1980 and it was up to Dad to explain. It was about then that I learned about Frank Howard and the previous incarnation of the Senators with Walter Johnson.

Something else....
During the 1982 season, Rickey Henderson set the all time single season stolen base record. In a game against the Tigers with Fahey catching, Henderson stole bases #116 and #117, one away from tying Lou Brock’s record. Controversy arose when Fred Stanley was picked off of second, giving Henderson, the runner at first, a chance to tie the record at home. Fahey gunned down Rickey instead allowing him to break the all-time record for times caught stealing in a single season. As a Tigers fan, I am endeared to Mr. Fahey for having Rickey wait another day to accomplish the inevitable.
Posted by Dean Family at 6:10 PM