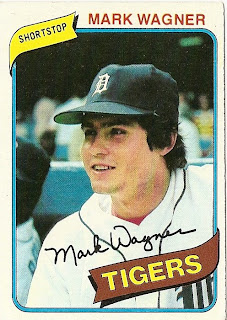 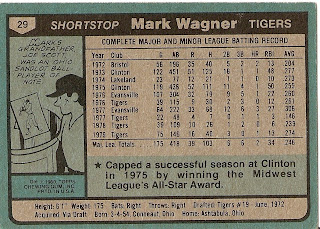 Who was this player?
Mark Wagner, infielder, Detroit Tigers
Wagner was primarily a shortstop being reduced to a part-time player with the emergence of Alan Trammell in Detroit. With the rise of Trammell and second baseman Lou Whitaker, there was little place for Wagner in the Tiger infield and he would be traded to the Texas Rangers at the conclusion of the 1980 season.

In 1976, when Mark Fidrych was making a national splash, several young players began dotting the Detroit Tigers' landscape. One of those players was shortstop Mark Wagner, who in limited duty, batted .261. While never seeing regular playing time, he reached career highs in 1979 in games played, batting average and hits. He faltered at the plate in 1980, which led to his trade to the Rangers.

In Texas, Wagner resumed his subsitute role, but in 1982 was given a chance as the regular shortstop. In August, the Rangers traded for Bucky Dent and Wagner was slated as his understudy. After spending most of 1983 in the minor leagues, he caught on with Oakland A's in 1984.

On August 20 of that year, his old team, the eventual World Champion Tigers, were hammeing the A's in Oakland. Wagner took to the mound against his old mates, allowing no runs in his 1 2/3 innings of work. After 1984 and 9 seasons, Wagner never reappeared in the majors.

He returned to the Tigers in the early 1990s, first as manager of the Bristol Tigers (A) before moving up to Fayettville and Lakeland (AA). In 1996, he was manager of the Princeton Reds (A).

Why I love this card
Being from the Detroit area, it was always special to get card of a hometown player. This particular card was the last one in 1980 that I needed to complete the Tigers team set. I ended up trading a Carl Yastrzemski card for it. I didn't care if I had doubles of Yaz, I still would have done it even up to complete the team. Thank you Johnny Rashid, wherever you are.

Something else....
In late 1976, Wagner had a 3 hit game at Yankee Stadium followed by a 4 hit game against the Indians a couple of weeks later. This late season performance led many fans to believe that Wagner would be the shortstop of the future. Then along comes this Trammell guy......
Posted by Dean Family at 9:59 PM