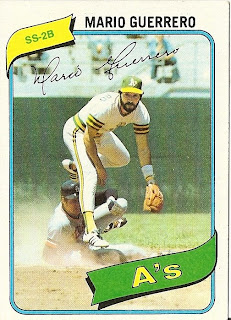 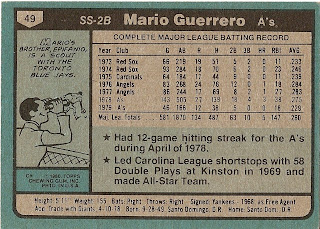 Who was this player?
Mario Guerrero, infielder, Oakland A’s
The diminutive right-handed hitting Guerrero had lost his starting position in 1979, primarily due to a mid-season benching. New A’s manager Billy Martin was hired in Spring Training 1980 and he made Guerrero his primary shortstop, sometimes sharing time with Rob Piccolo. Guerrero would appear in 116 games and achieved career highs in runs scored and stolen bases.

Signed as a free agent by the Yankees in 1968, Guerrero was the player named later in the trade to Boston that sent relief ace Sparky Lyle to the Big Apple. He served primarily as a utility player in 1973, but won the Red Sox shortstop position from future Hall of Famer Luis Aparicio in the spring of 1974. Mario promptly lost the job to minor league teammate Rick Burleson at midseason and he returned to the bench. The progress of Burleson along with a spring holdout (the first by a Sox in 18 years) prompted Guerrero’s early Boston departure. He was traded to the St. Louis Cardinals in April 1975.

Guerrero played sparingly in St. Louis and he was traded again, this time to the California Angels in May 1976. It was in Anaheim that he achieved career highs in batting, hitting .284 and .283 in 1976 and 1977 respectively. However, he never received an opportunity to play on a daily basis and he signed with the San Francisco Giants as a free agent in December 1977. Surprisingly, Guerrero was then traded to Oakland in a package that made Vida Blue a Giant.

In Oakland, Guerrero became a starter, and helped Oakland off to a fast start in 1978. While the A’s faltered and finished 6th, Guerrero batted .275 and achieved career highs in nearly every offensive category. After the 1980 season, he was traded to the Seattle Mariners, but he was released in Spring Training 1981, ending his eight-year career.

Why I love this card
Kiko Garcia's reign as "best action shot" of the 1980 set has come to an end, with Guerrero completely in the air for this shot. I was always curious to the identity of the sliding Detroit Tiger in this shot and in 1980, it was the subject to much conjecture. I always thought it was Eddy Putman, my dad suggested either Mark Wagner or Champ Summers. Through the miracle of the internet, 29 years later, dad was right, it was Wagner. Here's the box from the likely 1979 game.

Something else....
In retirement, Guerrero developed a reputation in the Dominican Republic. Raul Mondesi had to sit out part of the 2004 season due to a court battle with Guerrero and he won a similar settlement against Geronimo Berroa. This brought Guerrero criticism from other Dominican-born players, because he sued these players for 1% of their career earnings in exchange for advancing their careers. A detailed article can be found here.
Posted by Dean Family at 7:00 PM