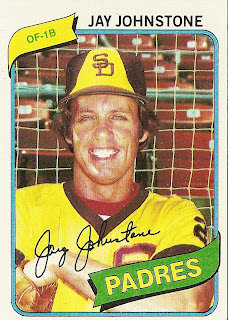 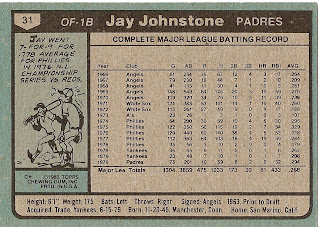 Who was this player?
Jay Johnstone, reserve outfielder, San Diego Padres
Johnstone spent time with two teams in 1979, first New York Yankees who then traded him to the San Diego Padres in mid-season. He signed a free agent contract with the Dodgers in December, 1979 and planned to be a part of the Dodgers bench in 1980. Johnstone would prove to be a valuable addition, batting over .300 as the Dodgers lost a one-game playoff for the NL West to the Houston Astros.

Jay Johnstone survived 20 years in the Majors primarily as a utility player - with 500+ at-bats in only one season (1969). Johnstone was signed by the Angels in 1963 and came to the majors in 1966. Jay spent five seasons in Anaheim primarily as a left-handed bat off the bench and defensive replacement. After that, he would never spend five full seasons in a row with another major league team.

He was traded after the 1970 season to the Chicago White Sox, and hit only .188 in 1972. After being released at the end of 1973 spring training, he caught on with the Oakland Athletics for a cup of coffee. The St. Louis Cardinals bought him in early 1974 but released him before the end of spring training and he signed with the Philadelphia Phillies, for whom he would play four seasons and part of a fifth before being traded in mid-season 1978 to the Yankees, with whom he appeared in the 1978 World Series. He was also part of the Phillies NL East champions in 1976 and 1977.

In 1981, he hit a pinch-two run home run in Game Four of the 1981 World Series against the New York Yankees, the home run rallying the Dodgers from a 6-3 deficit to win 8-7. The victory also enabled the Dodgers to tie the Series at two games each; they won the next two games to win it all. He released by the Dodgers and signed by the Cubs in 1982. Johnstone stayed with the Cubs until he was released shortly before the 1984 NLCS. He ended his career in 1985 after a return to the Dodgers. In seven postseason series, Johnstone batted a combined .435 (10-24)

A notorious practical joker, he was a Yankees broadcaster from 1989 to 1990 and a Phillies broadcaster in 1992 and 1993. He appeared in The Naked Gun and hosted a syndicated sports bloopers program.

Why I love this card
The appearance of the hideous Padres warmups. I didn't realize that these had numbers on the sleeves. Not that it matters or anything.