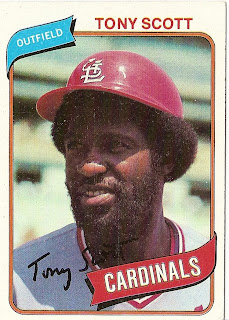 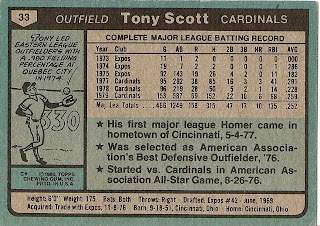 Who was this player?
Tony Scott, centerfielder, St. Louis Cardinals
Scott was entering his second season in 1980 as the Cardinals everyday centerfielder. He was given the position in 1979 by manager Ken Boyer and his speed led Cardinal fans to believe he was the heir to retired Lou Brock. While his offensive numbers dipped in 1980, he was an excellent defensive outfielder, making only one error all season.

Originally drafted by the Montreal Expos in 1969, Scott rose through the Expos minor league system as a excellent fielder with blazing speed. If there was one knock on Scott during his career, it may have been that he struck out too often and didn't make enough contact. Scott made his major league debut as a September call-up in 1973, and split time the next three seasons between Montreal and the minor leagues.

After spending all of 1976 with the Expos AAA affiliate in Denver, Scott's career was rejuvenated when he was traded to the Cardinals for the 1977 season and he became St. Louis' full-time centerfielder in 1979. However, when Boyer was fired and Whitey Herzog took over in 1980, he fell out of favor with the new GM/manager and was traded to the Houston during the 1981 season.

Scott reached the postseason for the only time in his career in 1981, as Houston's centerfielder against the Dodgers. Scott only managed three hits in the five game series as the Dodgers prevailed. He returned to the Astros in center for the 1982 season, but his .239 average led the Astros to obtain Omar Moreno. Since Moreno was also known for speed and defense, Scott was relegated to a substitute. After a slow start to the 1984 season, Scott returned to Montreal to put the wraps on an 11-year career.

Why I love this card
Topps finally got the color scheme on the team name pennant right! After purple for the Phillies, red for the Royals and blue for the Reds, the Cardinals hit a home run with the red and white pennant. Bonus points for the players name also being in red.

Something else....
Scott almost singlehandly made the Cardinals World Series champions in 1982. First, he was traded for Joaquin Andujar, who would win 15 game and two in the Series. Secondly, he unwillingly was one of the causes for the Garry Templeton for Ozzie Smith trade. Templeton was unhappy with a lot of things in 1981. One of them was the trade of his best friend, Scott. On Ladies Day, he grabbed his crotch when fans booed him for failing to run out a grounder. Whitey Herzog grabbed Templeton into the dugout, suspended him and traded him for Ozzie Smith. The rest is history.
Posted by Dean Family at 2:20 PM