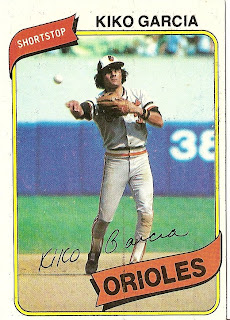 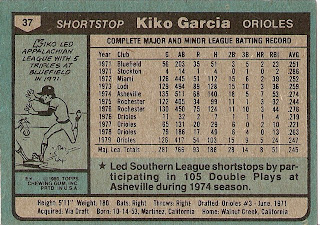 Who was this player?
Kiko Garcia, shortstop, Baltimore Orioles
As the starting shortstop of the defending AL champion Baltimore Orioles, the 1980 season began with high hopes for Kiko Garcia. After taking over shortstop for longtime Oriole Mark Belanger, Garcia batted .400 on a national stage in the World Series. He was slated to be the Orioles everyday shortstop in 1980.

After rising through the rich Orioles farm system of the 1970s, Garcia made his major league debut in 1976 and settled into the majors the following season. After hitting .263 in 79 games as Belanger’s understudy in 1978, he was given the position outright for the 1979 season.

The Orioles won 102 games that season with Garcia predominantly batting eighth and playing a solid shortstop. He shined in the postseason, batting .273 with a run scored and two RBI in the ALCS against the California Angels. He was even better in the Series, driving in six, including four in a Game Three victory for the Birds.

An alarming drop in batting average in 1980, coupled with the ascension of a young man named Ripken suddenly made Garica expendable and he was traded to the Houston Astros shortly before the start of the 1981 season. He was a substitute with the Astros that season, but he did see action in the NL West Divisional Series that season. After two years in Houston, he signed a free agent contract with the Phillies for the 1983 season. He was on the roster of the NL Champions that season, but he did not appear in the postseason and the Phillies lost the World Series to Garcia’s former team, the Orioles. He played two more years in Philadelphia before retiring in 1985 after a 10 year career.

After baseball, Garcia carved out a successful career as a high school softball coach

Why I love this card
What a great action shot here. Taken between innings, there is even a nice view of the ball leaving Garcia's hands. This may be the best action photo so far in the 1980 set, especially after a series of closeups. Bonus points for this photo being taken at Yankee Stadium.

Something else...
I don't know if there is a error on the cartoon regarding on the reverse. While it mentions that Garcia led the Appalachian league in triples, he did so with five and the cartoon character appears to be holding up eight fingers. Oh well.
Posted by Dean Family at 8:39 PM