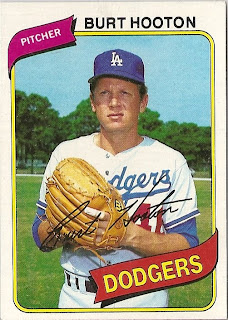 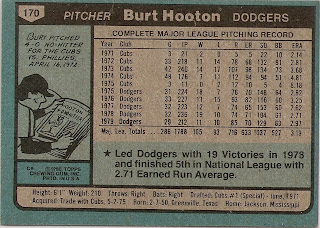 Who is this player?
Burt Hooton, starting pitcher, Los Angeles Dodgers
The Opening Day pitcher for the Dodgers in 1980, Burt Hooton had already established himself as a valuable member of the Los Angeles Dodgers vaunted pitching staff. The master of the knuckle-curve, Hooton began the 1980 campaign inconsistently. He then rattled off seven consecutive wins after Memorial Day to help keep the Dodgers in contention in the National League West. He faltered down the stretch somewhat, but still finished the year ninth in the league with 14 victories and a very respectable 3.66 ERA.

The pride of the University of Texas, Hooton was perhaps the Longhorn's greatest pitcher, posting a 35-3 collegiate record and firing two no-hitters. He was a first round pick of the Chicago Cubs in 1971 and made his major league debut without spending a day in the minor leagues. Hooton eventually was optioned to Triple-A Tacoma for 12 games, one of which was a 19-strikeout performance that tied a Pacific Coast League record. Hooton lived up to his advanced billing in his very first appearance in 1972, firing a no-hitter against the Philadelphia Phillies.

Despite his promising start, Burt was unable to win consistently as the team's fortunes declined in the early 1970s. The competitive Hooton grew tired of the Cubs losing ways and clashed with manager Jim Marshall. It resulted in his trade to the Los Angeles Dodgers in May 1975. In LA, Hooton would achieve his greatest fame and his most success. He would win 112 games in a Dodger uniform and was consistently among the league leaders in ERA. His best season was probably 1978, when he won 19 games, finished third in the league in ERA and was second in the Cy Young voting that season. His only All-Star appearance also game in Dodger Blue, during the 1981 season.

Hooton's pitching led the Dodgers to the World Series three times, finally winning the elusive championship in 1981. Hooton helped lead the way, being named MVP of the 1981 NLCS against Montreal and was the winning pitcher in the Game 6 clincher of the World Series. Overall, Hooton was 4-1 with a 0.82 ERA in the 1981 postseason. He won six postseason games in his Los Angeles career and appeared in seven different postseason series.

His effectiveness began to wane after the Series win and he finished his Dodger career pitching out of the bullpen. He played his 15th and final season in the American League with the Texas Rangers. He spent the early part of the 2000s as the pitching coach of the Houston Astros and is currently the pitching coach with the Astros' Triple-A affiliate, the Round Rock Express. Hooton has also been honored by the University of Texas by having his number retired and he has been inducted into both the State of Texas and College Baseball Halls of Fame.

Why I love this card
Tommy Lasorda nicknamed Hooton "Happy" because he never smiled (as evidenced on this card). Long before we knew that, we called Hooton "Mr. Mean" because he looked exactly like the guy in the corner house who would bark at us every time somebody walked on his lawn. It could have been February and 10 degrees, he would still chirp. As we got older, we outgrew "Mr. Mean" but at least two of the neighborhood kids still called him Burt Hooton.

Something else....
Hooton is also famously known for his "Black Friday" meltdown in Game 3 of the 1977 NLCS against the Phillies. According to Wikipedia:

Dodger starter Burt Hooton began to dispute ball/strike calls issued by home plate umpire Bob Engel. Hooton's attitude and delay of the game aroused the displeasure of Philadelphia's infamous "boobird" fans, who took out their wrath upon their team's opponent. As the volume of the boos escalated to a deafening level, Hooton uncharacteristically lost control of both his pitches and his composure, issuing three walks with the bases loaded giving the Phillies a 3–2 lead.