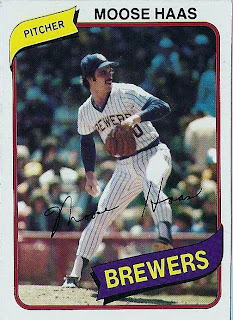 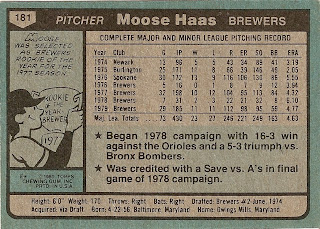 Who is this player?
Moose Haas, starting pitcher, Milwaukee Brewers
As a 24-year old control pitcher entering his fifth season, Moose Haas enjoyed his most successful season in 1980. He won 16 games that year and established himself as one of the best pitchers on the Brewers staff. He placed in his league's top ten in twelve different categories, including ERA, complete games and shutouts. However, he also placed eighth in losses and home runs allowed.

Born Bryan Edmund Haas, here is how he earned his famous nickname:

"Moose" earned his nickname after an unfortunate weekend run-in with a full grown moose while on vacation in the Appalachian mountains. The confrontation resulted in the 12 foot tall moose felled at the hands of Mr. Haas. The head of the moose (later named "Wallace") was hung in his dining room as a memento of that infamous meeting and remains on display to this day.

He signed with the Brewers in 1974 as a hard throwing righthander out of Franklin High School in Reisterstown, Maryland. He made his major league debut two years later and earned a spot in the starting rotation in 1977. He won ten games in his first season and looked to be a major part of the Brewers' future plans. The path was delayed somewhat in 1978 when he blew out his elbow in an April game against Boston. He missed the remainder of the season and when he returned in 1979, he transformed himself from a power pitcher into a finesse pitcher. He won 11 games in his comeback season.

Haas followed up his strong 1980 season with an 11-7 season during the strike-shortened 1981 season. The Brewers qualified for the playoffs that year, but Haas lost his two starts in the divisional playoff, including the Game 5 finale against the Yankees. He had better luck in 1982, defeating the Angels 9-5 in Game Four of the ALCS, but he was hit hard in two appearances in the World Series.

He had an excellent season came in 1983 as his 13-3 mark gave him a league-leading .814 winning percentage. However, the Brew Crew never returned to the postseason. Haas remained a durable and reliable part of the Brewers rotation through 1985, averaging 13 victories a season. To this day, his name still dots the Brewers record book in several career pitching marks. The Oakland A's gave up four players to get Haas in March of 1986 and started quickly with a 7-2 start. However, he began to have arm trouble that ended his season and despite a brief comeback in 1987, his 12-year career was over.

Why I love this card
His name. As an eight year old, not many names in baseball were much better than that.

Something else....
Probably due to the sour feelings surrounding the 1981 strike and split season, the Eastern Division Playoff between the Brewers and Yankees in largely forgotten today. Four of the five games were close and featured six future Hall of Famers and other All-Star caliber players. It was the Brewers' first postseason against the veteran Yankees and I was eager to see the Brew Crew take the Yankees out. The Brewers got off to an early 2-0 lead and I went to bed happy. Haas couldn't hold it and the Brewers lost the game and the series. I can still remember how disappointed I was when I went to school the next day. Don't worry Moose, I have forgiven you.
Posted by Dean Family at 10:51 PM