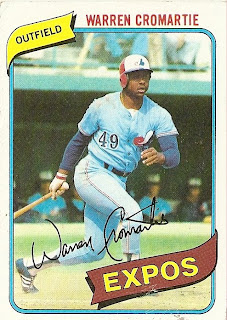 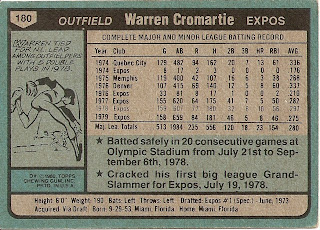 Who is this player?
Warren Cromartie, leftfielder, Montreal Expos
Originally part of the "Outfield of the 80s," Warren Cromartie was shifted to first base when the Expos acquired Ron LeFlore. "Cro" handled the transition flawlessly, appearing in all 162 games and clubbing a career high 14 home runs. Typically batting fifth in the lineup, his batting average hovered over .300 for most of the season and he led the league in intentional walks. The Expos faded down the stretch and lost the NL East flag on the final weekend of the season.

Cromartie played high school baseball with future Expos' teammate Andre Dawson and was Montreal's first round pick in the 1973 amateur draft. He debuted a little over a year later as a September call-up in 1974. The lefthanded hitting Warren split time between Montreal and the minor leagues the next two seasons before finally earning a starting position in 1977. Cromartie would team with Dawson and Ellis Valentine as a group of promising young players on a rising Montreal team.

Unfortunately, the Expos never quite attained the greatness predicted of them. Cromartie moved back to the outfield in 1982 when the Expos acquired Al Oliver. A fan favorite, he even had a candy bar with his name on it sold at Olympic Stadium. Cro was a dependable part of the Expos lineup for seven seasons, typically batting around .280. However, when his contract expired at the end of 1983, the 30-year old Cromartie took the unprecedented route of signing with the Tokoyo Giants. It was one of the only times a player went overseas during the prime of his career.

It Japan, Cromartie would play for the legendary Sadahara Oh. He would spend seven seasons in Japan and was named the MVP of the Central League in 1989 when he batted .378 with 15 home runs and 78 RBI. Cromartie was a productive player in Japan and again was one of the most popular. His tenure in Japan was loosely reflected in the movie "Mr. Baseball," and he wrote a book detailing many of his experiences in the Japanese league. He returned to Major League Baseball in 1991 with the Kansas City Royals and batted .313 mainly as a reserve over the course of 69 games. It would be the final season of his 10 year major league career.

Today, he hosts a radio show "Talking Hardball with Cro" in Fort Lauderdale. He served as a broadcaster for the Expos in their final season in 2004 and was the manager of the Japan Samurai Bears. The Bears were all-Japanese team in the independent U.S. Golden Baseball League which existed for one season, chronicled in this film. (** Warning - the trailer contains colorful language)

Why I love this card
I liked the Expos in 1980. Granted, I was more of a Pirate fan, but the Expos intrigued me. Whether it be their multi-colored "M" on their cap (still think it's and ELB) or their core of young players like Cromartie, the Expos were a favorite. I thought that this card was an error card when I got it due to the number on Cro's jersey being blue instead of red (yes, I paid attention to that stuff). What I realized much later was that Topps simply used a 1978 photo of Cromartie as they changed their uniform subtly in 1979.

Something else....
In 2007, Cromartie made his professional wrestling debut in a charity match against Japanese legend Tiger Jeet Singh. Coming to the ring with a baseball bat and in a uniform with "Samurai Man" across the front, Cromartie emerged victorious, likely after this amateur wrestling move: 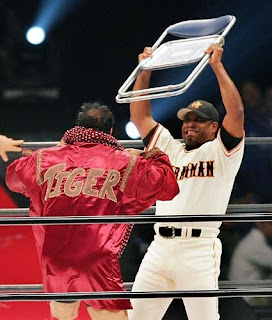