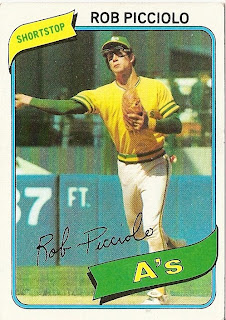 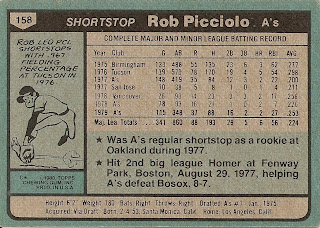 Who is this player?
Rob Picciolo, infielder, Oakland A's
With the arrival of Billy Martin in 1980, Rob Picciolo lost his starting shortstop position in favor of Mario Guerrero. Picciolo was the Opening Day second baseman for the A's and when Guerrero slumped, he reclaimed his starting position. Normally a light hitter with a reputation for not drawing walks, the righthand hitting Picciolo batted .240 in 1980 and walked only twice in 281 plate appearances. He hit five home runs that year, with three of them coming in September.

Rob Picciolo was the 4th overall pick in the secondary phase of the 1974 draft out of Pepperdine University. After two years in the minors, Rob made a quick entrance to the majors when he earned the shortstop position in 1977, taking over for popular veteran Bert Campaneris. He appeared in 148 games during his rookie season, and hit a meager .200. When Guerrero joined the club in 1978, he was relegated to utility status and regained the position again in 1979. That year, the A's were one of the worst teams in modern history, losing 108 games. Picciolo walked only three times in 115 games, one of them intentionally.

Again the primary shortstop for the 1981 AL West champions, he had his best offensive season, batting .268. He batted .250 in during the postseason, but the A's fell to the New York Yankees in the ALCS. He was traded to the Milwaukee Brewers in May of 1982 and appeared in only 36 games over the next two seasons. He served primarily as understudy to Robin Yount during his two years in Milwaukee and was on the roster of the 1982 American League Champions. Picciolo did not appear in the postseason.

Rob was released in 1984 and caught on with the California Angels. He appeared in 87 games, primarily as a defensive replacement and batted only .202. The Angels did not resign him for 1985, but he returned to Oakland for his ninth and final season. Again primarily a utility player, Rob batted .275 in 71 games. In 1,720 plate appearances, Picciolo walked only 25 times, becoming one of the hardest players in major league history to walk.

He was not out of baseball long as he was named manager of the Single-A Spokane Indians in 1986 & 1987. That earned him a promotion to the big-league level as Padres coach in 1990. That began a 16-year tenure as the longest serving coach in Padres history. Today, he works as an instructor in the Los Angeles Angels' chain.

Why I love this card
Like the Mario Guerrero card, this was one of my favorites in the 1980 set. This in-game action shot of Picciolo in his green and gold glory is a memorable card for me. As a double printed card, I also have seven Picciolo cards so that's another reason why its probably so memorable.

Something else....
Time to update the scorecards. We are currently up to 14 of the 66 total DP cards and I cannot see a rhyme nor reason as to why certain players are chosen. Some players like Willie Wilson and Fred Lynn are stars, while Picciolo was not. I can't detect anything numerically either as to why certain cards are chosen. Again, if anyone would like to pass along information, please let us know.
Posted by Dean Family at 10:55 AM