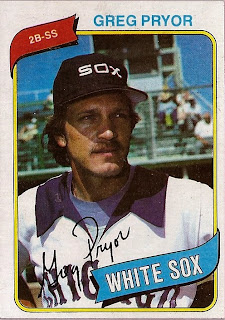 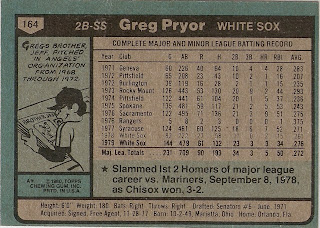 Who is this player?
Greg Pryor, shortstop, Chicago White Sox
The Opening Day starter at short for the Chicago White Sox, Greg Pryor won the position in 1979 with a solid year at the plate and appeared to be the incumbant for years to come. Tpically batting ninth, Greg began the 1980 campaign slowly, but the White Sox were a weak hitting club and Pryor was utilized at three different infield positions. He spent significant time at third, replacing Kevin Bell who batted only .178. He finished the year with a .240 average in 76 games at shortstop and another 41 at third base.

The son of former Baltimore Colt George Pryor, Greg earned a scholarship to Florida Southern College, mainly due to his older brother Jeff. The diminutive Greg was not a serious college prospect wheras Jeff showed promise as a pitcher. Pryor's father conviced the coach to give scholarships to both sons by threatening to send Jeff to another college. Greg earned his keep and ended up making the NCAA Division II All-American team two seasons in a row. This earned him attention from major league scouts and he was drafted in the sixth round of the 1971 draft by the Washington Senators.

When the Senators moved to Texas to become the Rangers in 1972, Pryor worked his way up the minor league ladder and was given a brief look by the Rangers in June, 1976. He was traded to the New York Yankees in 1977, but never appeared in a major league game for them and was not resigned following the season. Greg caught on the White Sox in 1978 and spent the entire season on the major league roster, batting .261 as a utility infielder.

After the 1979 season, Pryor saw his playing time decrease steadily and he was traded to the Kansas City Royals in March, 1982. He spent five seasons (1982-1986) in Kansas City, mainly as George Brett's understudy. Greg had significant playing time in 1984 when Brett was injured and he achieved career highs in home runs. Another highlight was Pryor's participation in the post-season in 1984 and 1985 when the Royals won the World Series. He was released in Spring Training 1987 and his 10-year major league career had come to an end.

In retirement from baseball, Pryor has been committed to personal health and physical fitness. In 1995, he founded Life Priority, a nutritional supplements company, in Lenexa, Kansas. Ten years later, the enterprising Pryor created Sportsaholic, Inc. Created in the sorority house of Pryor's daughter, the idea devloped into fan wear and appearal for college teams in the midwest.

Why I love this card
Pryor's card is first of several little-known "error" cards sprinkled throughout the 1980 set. While I personally have never seen in person, a version of Pryor's card exists without his name on it. There is even some speculation of the existance of this card as most collectors have never seen it. One sold on ebay a number of years ago for over $200 so it does exist. Below is an approximation of what Pryor's card would look like. Note that this is a touched up photo of the real Pryor card and NOT the original error card. 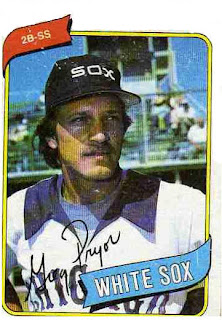 Something else....
Pryor was the last draft pick of the Washington Senators to play in the major leagues. In case you were wondering.
Posted by Dean Family at 1:21 PM