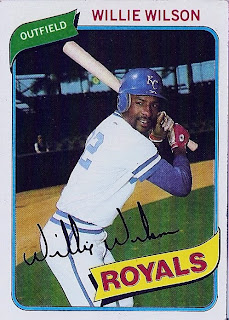 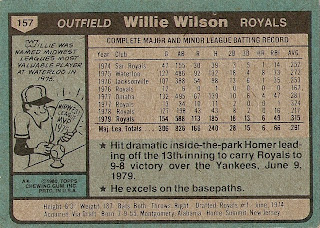 Who is this player?
Willie Wilson, left fielder, Kansas City Royals
In establishing a major league record with 705 at bats in 1980, Willie Wilson was one of the most exciting players in the major leagues. The switch-hitting Wilson led all of baseball in runs scored, triples and an incredible 230 hits. He batted .326, stole 79 bases and was the catalyst for a Royals team that won the American League pennant. He won the Gold Glove and Silver Slugger Award but set a record in the World Series by striking out 12 times as the Royals fell to the Phillies in six games.

A highly regarded high school baseball, football, and basketball player in Summit, New Jersey, Willie stole 46 bases as a senior without even sliding. Wilson was drafted by the Kansas City Royals in the first round of the 1974 draft and he made his debut with the team as a September call-up two years later. He was a fourth outfielder with the club in 1978 as the Royals won the AL West for the third straight season. The following season, his first as a regular, he led the league in stolen bases in 1979, scored 113 runs and batted .315.

The Royals again made the post season in 1981, and Wilson again topped the .300 mark (.303). The following year, 1982, was noteworthy. Named to the All Star team for the first time, Willie led the AL in batting with a .332 average with 194 hits and a league-leading 15 triples. In 1983, Wilson found himself in a drug scandal and pleaded guilty to misdemeanor drug charges when he attempted to purchase cocaine. Willie became the first active major leaguer to serve jail time, serving 81 days at Fort Worth, Texas, Federal Correctional Institution. He was suspended by commissioner Bowie Kuhn for the entire 1984 season, but the suspension was reduced on appeal and he was able to return on May 15. When Wilson returned, he hit .301 and stole 47 bases.

While a solid and productive player, Wilson never was the same player after his arrest. He did help the Royals to the World Championship in 1985 and would lead the league in triples three more times (1985, 1987 and 1988). The Royals never returned to contention after their championship and as the 1980s came a close, Willie's playing time began to decrease as he got older. He signed with the Oakland A's in 1991 where he spent two seasons and concluded his 19-year career in 1994 with the Chicago Cubs.

He was inducted into the Royals Hall of Fame in 2000 and spent time coaching in the Toronto Blue Jays system. Today, he runs the Willie Wilson Baseball Foundation and is the national spokesman for Team Smile to help underprivliged children. In August 2009, he had a one-game comeback with the minor-league Joliet Jackhammers. Here is an interview conducted with Willie earlier this year.

Why I love this card
I loved Wilson as a kid. I truly believed that he was on the way to Cooperstown in the early 1980s and I traded for all of his cards, stickers, stratch offs, you name it. But what I love about this card is a bit more subtle. First, Wilson is pictured wearing a different number on his back (22) than his traditional #6. Additionally, the number on the helmet is 30-something. I know that this is a Spring Training shot, but it seems there wasn't a whole lot of thought put into this photo. Maybe it was the idea of the lonely person in the stands behind Willie.

Something else....
During the first seven seasons of Wilson's career, he was a .312 hitter and had 796 hits and 285 stolen bases. The hit total he accumulated in that stretch represented 36% of his career total and his stolen bases were 43% of his career total. During the final 12 seasons of his career, he hit .300 only once and batted .272 during that span. Below is a scan of his 1980 Burger King card. The photo is the same, but there are a few differences. His name seems to be a different font than the regular 1980 issue, the "Royals" letters are outlined in black and his signature is higher up on his body. 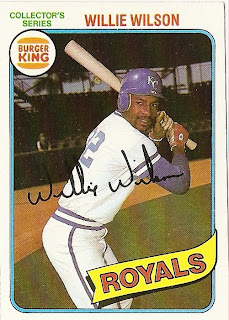 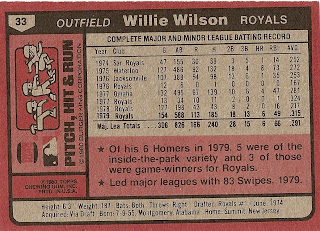