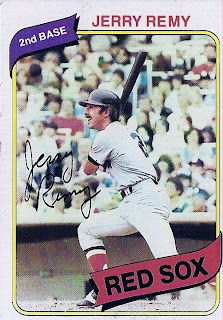 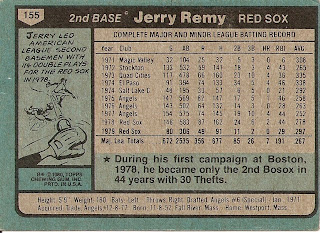 Who is this player?
Jerry Remy, second baseman, Boston Red Sox
Long before he was the president of "Red Sox Nation," Jerry Remy was the leadoff hitter and ingnitor of the Red Sox attack. The diminutive lefthand hitting second baseman started the 1980 season slowly, the exploded near the end of April with a four-hit game against Detroit. He had 13 more multi-hit games including another four-hit performance against Oakland on June 6th that took his average to a season-high .358. He was still well above .300 in July when he tore cartilage in his right knee running the bases in Milwaukee. It required surgery and Remy's 1980 season was over.

A New England native, Remy grew up in Somerset, Massachusetts and was drafted by the California Angels on the eighth round of the 1971 draft. After four years in the minor leagues, Remy made the Angels roster out of Spring Training in 1975 and was given the starting second baseman slot. Remy got a hit in his first ever at bat, and was then promptly picked off first by Steve Busby. That first season in Anaheim he batted .258 and led his team in runs scored. He showed good speed on the base paths and by the end of the season was batting leadoff for the Angels.

Remy would finish third in the American League in steals in 1977 and also placed eighth in triples. During his Angel tenure, he averaged 37 steals and 73 runs scored in his three seasons. At the end of the 1977 season, he was expendable after the Halos signed free agent Bobbt Grich. Predictably, he was traded, to his native Boston Red Sox. Remy responded with an All Star season in 1978, the spark plug in the explosive Boston attack. The Red Sox led the AL East for most of the season before their famous fade and one-game playoff loss to the New York Yankees.

The following season, Remy batted .297 but appeared in only 97 games due to injury and was headed towards career bests in 1980 before his season ended prematurely. In 1981, in a 19 inning game against the Seattle Mariners, Remy would pick up an American League record six singles and he would finish the season with a .307 batting average. Remy finished in the top ten in the American League in 1982 in at-bats, hits, and sacrifices. He would play well through pain through the 1984 season when his left knee caused him to retire after a ten year career. From the time of his injury on, Remy would have 10 separate knee operations to repair the damage in his knee.

Remy would later earn cult status in Boston over a 20-year broadcasting career. Starting in 1988 with NESN, "Rem Dawg" is a popular figure on Red Sox telecasts. He earned many local and national awards, was inducted to the Red Sox Hall of Fame and was given a day in his honor in 2008. Remy had a small tumor removed from his lung in 2008 and took a leave of absence in April 2009. He returned to the broadcast booth in August.

Why I love this card
It was a special treat when I would occasionally get a grocery pack. I remember shopping at the local Chatham Supermarket with my dad and he let me choose a pack. What a decision! It seemed like every pack had a Remy card somewhere on the front or the back. Ultimately, I found one with a Tiger (Phil Mankowski) and a Pirate (Ed Ott) on it as my final choice. But the Remy card stuck out for its frequency in those packs.

Something else....
OK, I had to look it up. On the back of this card it says that Remy is only the second player in 44 years to steal 30+ bases in a season for the Red Sox. The other? Dom DiMaggio? Luis Aparicio? Jackie Jensen? Come to think of it, the Red Sox didn't have many guys stealing bases during this period, did they? The answer? Tommy Harper with 54 in 1973.
Posted by Dean Family at 10:29 PM