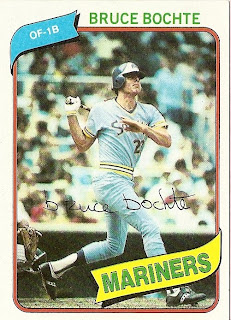 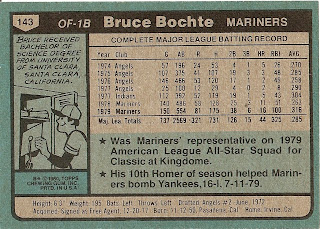 Who is this player?
Bruce Bochte, first baseman, Seattle Mariners
The lefthanded-hitting Bruce Bochte was far and away the Seattle Mariners' "franchise player" as the 1980 season began. He got off to a fast start the first two weeks of the season and was leading the league in batting with a .429 average. Inevitably his hot hitting cooled but he maintained a .300 average with solid defensive play. The Mariners lost 103 games in 1980 and replaced their manager at mid-season; Bochte led the club in hits, doubles, RBI and average. With two consecutive solid seasons, the 29-year old Bochte was a fan favorite with a bright future.

A native Californian, Bochte was a graduate of Santa Clara University when he was selected by the hometown Angels in 1972. He mastered minor league pitching, never batting below .319, and made his major league debut in 1974. His first manager, Dick Williams, proclaimed Bochte a future batting champion and in his first full season (1975) led the Halos with a .285 average. The 1976 season began strongly as Bruce had 10 multi-hit games out of his first 25. He began to press to live up to expectations and went into a prolonged slump - finishing the year with a .258 average. When the Angels shocked the baseball world and signed three high-profile free agents for 1977, Bochte knew his days in Anaheim were numbered.

When he didn't sign a contract for the 1977 season, Bochte and Sid Monge were sent to the Cleveland Indians. He hit .304 with the Tribe that year, again leading his team. As with the Angels, Bochte was used both at first and in the outfield. He did not resign with the Indians and signed as a free agent with the Mariners prior to the 1978 season. He played five different positions his first year in Seattle, including all three int the outfield, but felt the pressure of being the Mariners' high-priced off-season aqcuisition. Again he struggled and finished the year with a .263 average. However, he found the Kingdome to his liking as his power numbers reached then career highs.

1979 would be Bochte's best season. He finished tenth in the AL with a .316 average and drove in 100. For most of the first half he was among the top batsmen in the league and he was recognized as Seattle's representative in the All-Star Game. With the game held in the Kingdome, Bochte received the loudest ovations of the night, first in the pregame introductions and later when his single off Gaylord Perry in the sixth inning tied the game. Bochte remained a solid and productive player during his five-year tenure in Seattle and again led the team in batting in 1982. Shockingly, he announced his retirement at the end of that season and despite a lucrative offer to play for the New York Yankees, Bochte stayed out of baseball during the 1983 season.

While never confirmed, it was speculated that Bochte, the team's player-rep, was left with a foul taste with baseball after the 1981 Player's Strike. He returned in 1984 and held down the A's first base job until the arrival of Mark McGwire. While he had solid seasons, he didn't replicate the success he had with the Mariners. He retired again for good after the 1986 season and 12 seasons in the majors. Today, Bochte has removed himself from baseball and works as a cosmologist. A good article about his transition can be found here. While this article is eight years old, this is still what Bochte does today.

Why I love this card
Maybe it was the ovation that he got at the 1979 All-Star Game. Or the single. Or the fact that the first 1980 Topps Super Card that I got that summer was also of Bochte. Whatever the reason, when I got this particular card, I was not only convinved that Bochte was a star but a mega-star in the Brett-Reggie-Bench category. This was one of the first cards I put in sheets and it took a while (probably his Oakland days) to convince me he wasn't going to be another Willie Stargell.

Something else....
This was also a DP card which probably also feuled by Bochte-mania because I have four of them. Unlike Gary-Matt Alexander, I never confused this Bruce Bochte with Bruce Bochy which is actually easier to do. Go figure.
Posted by Dean Family at 8:01 PM