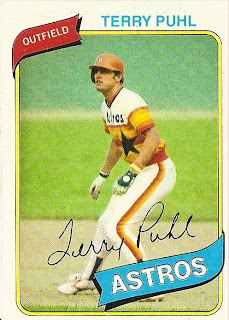 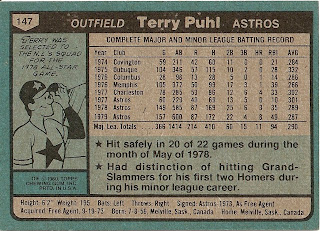 Who is this player?
Terry Puhl, rightfielder, Houston Astros
Statistically the greatest defensive outfielder of all-time, Terry Puhl was shifted from center fielder to right due to a series of off-season moves designed to provide the Astros with their first ever postseason appearance. Indeed, Houston won the NL West in 1980 before falling in a classic five game NLCS. Puhl was a series standout, leading all players with 10 hits and establishing a record by batting .529 (since broken). A season highlight came when he rapped out seven hits in a doubleheader against the Atlanta Braves.

One of the few natives of Canada to reach the major leagues, Puhl's high school didn't even offer baseball as a varsity sport. Instead, the lefthand hitting Puhl honed his skills on the sandlots of Saskatchewan and was signed as a free agent by the Astros in 1973. He was promoted to Triple-A in less than two years and established a reputation as a speedy defensive whiz that was difficult to stike out. Puhl was called up to Houston in the middle of the 1977 season and never spent another day in the minor leagues. He appeared in 60 games and batted .301.

1978 was his first full season in the majors and he got off to a torrid start, leading the league in batting at several points during the first half. Puhl was recognized by being selected to his first and only All Star Game. He slumped somewhat in the second half of the year, but finished with a very respectable .289 average and 32 stolen bases. Typically the Astros leadoff hitter, Puhl put up very similar numbers again in 1979(.287 30SB) as the Astros put together a strong challenge to claim the NL West in a race won by the Cincinnati Reds

As an everyday player, Puhl was a very solid contributor. During the period 1977-1984, he could be counted upon to appear in 125+ games, steal 20+ bases, bat .280+ and have a decent on base percentage while providing stellar defense. A fellow blogger, summed up Puhl nicely as "the epitome of being pretty good." Hamstring and ankle injuries took away much of his playing time in 1985 and 1986, but he did appear again in the NLCS in 1986, this time in a supporting role. As the Astros fourth outfielder in 1987, he appeared in over 100 games and batted a career high .303. He played in 121 games in 1989, his last season as a regular player.

Used primarily a pinch-hitter in 1990, the Astros did not resign the popular veteran when he season ended. When he departed Houston, only one other Astro appeared in more games and only three had more hits. He played his 15th and final season in 1991 with the Kansas City Royals. In retirement, he was elected to both the Canadian and Texas Halls of Fame and in 2006 coached the Canadian National team. Today, he is the head baseball coach at the University of Houston–Victoria. A recent interview with Puhl can be found here.

Why I love this card
Very much like Bruce Bochte, at this time, I was under the impression that Terry Puhl was a bigger star than he was. For that, I point to the 1980 Topps Wax Box on which Puhl is prominent. I mean, if you were on the box it had to mean you were a star, right? Reinforcing this for me was that I was lucky enough to get a box in 1980. No, it not what you're thinking....my Dad asked the clerk at 7-11 if we could have the box when we bought the last two packs. The clerk approved. For years it housed my 1980 cards and I still have it to this day.

Something else....
Technically, Puhl no longer has the highest fielding percentage of all time as an outfielder. Ichiro Suzuki of the Seattle Mariners has a .994 fielding percentage to Puhl's .993, but Ichiro is still active. While not wishing ill of anyone, let's root for a Ichiro to make a handful of errors before his career is done so that Puhl can keep the record, shall we?
Posted by Dean Family at 11:56 PM