Which Vida Blue For You?

First off, thanks are in order for some folks overdue of acknowledgement:

Carl Crawford Cards - The 1957 Virgil Trucks card is awesome. I didn't realize that actually it is my second signed '57 as I also have a Billy Hoeft. Thanks for a nice addition to the collection.

Jim at The Phillies Room - Our trade helped us put a major dent in our 1979, 1980 and 1987 sets. Predictably, my son was most excited about the stickers you sent along, but he did appreciate the cards. He is sitting with me as I type this so he passes along his thanks. I know I still owe you our end of the deal, I am still trying to dig up more Phillies.

Matt at Project Baseball 1976 - Way overdue thanks for our first follower. I don't even know what happened to the cards you sent as they were given to my son and promptly devoured.

Finally, Night Owl sent along some scans of the 2003-2005 run of Topps Fan Favorites, which leads me to this post.

While I think that this may be fairly one-sided, I will be posting from time-to-time the different variances of 1980 Topps cards that I can find out there. Whether it be the regular issue, Burger King cards, Topps Fan Favorites or custom made, I'll post it and put it up to a vote. I'll try to stay with cards we've covered for now and add along as we go along.

If any of you custom carders want to try your hand feel free. I'm not that adept as of yet. You can email them to me at maxcarey @ yahoo.com

Here is a shot of the 2005 Fan Favorite Vida that I had never seen before: 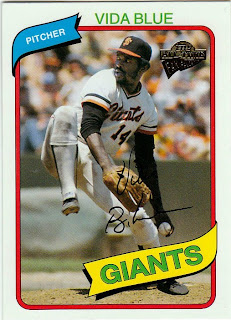 Next the actual card issued in 1980 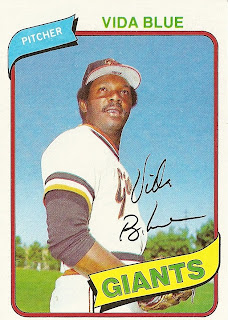 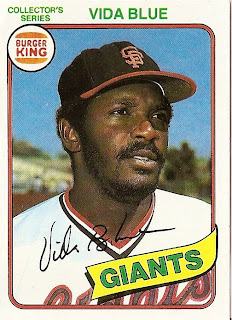 The voting booth is on the right.....Which Vida Blue card is the best??
Posted by Dean Family at 10:31 PM