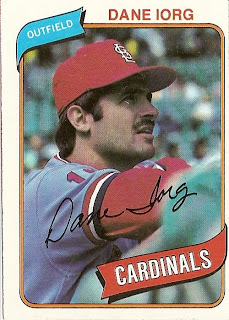 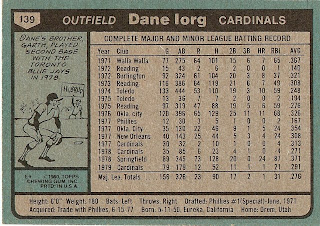 Who is this player?
Dane Iorg, reserve outfielder, St. Louis Cardinals
Best known today for his game-winning hit in Game 6 of the 1985 World Series, Dane Iorg was the usual replacement for the oft-injured Bobby Bonds in 1980. He appeared in 105 games in 1980, a career high. An excellent contact hitter, he batted .303 that season also seeing action at first base. He had carved his niche on the Cardinals as a valuable bat off the bench and a dependable player that could play multiple positions.

A product of Bringham Young University, Iorg was one of a long line of Mormons to play Major League Baseball, including his brother Garth. He was a first round draft choice of the Philadelphia Phillies in the 1971 draft and proceeded to spend the next six seasons traveling the minor leagues. He finally made his major league debut on Opening Day in 1977 but only spent a month on the roster before being dispatched to the minors again. Unable to crack the Phillies lineup, he was traded to the St. Louis Cardinals in a package that brought Bake McBride to Philadelphia.

Dane spent parts of the '77 and '78 seasons on the major league roster before finally sticking full time with the Cardinals in 1979. He appeared in 79 games that season and batted .291, primarily as a pinch-hitter and defensive replacement. In 1981, Iorg led the team with a .327 and had 16 multi-hit games. The Cardinals finished with the best record in baseball, however, due to the Strike of 1981, the Cardinals were denied a postseason opportunity due to the split-season playoff arrangment.

Getting more playing time in 1982, Iorg was splitting time in left with Lonnie Smith. The Cardinals won the NL pennant that season, but Iorg did not appear in the Cardinals NLCS sweep over the Cardinals. He was slated to be the Cardinals designated hitter in the World Series against Milwaukee. In those days, the DH ruled alternated year to year rather than the current home team arrangment. Iorg appeared in five Series games and batted an incredible .529 (9-17) as the Cardinals won the Series in seven games. He appeared in only 58 games in 1983 as he chunks of playing time due to a series of injuries. He was sold to the Royals in May of 1984.

As a Royal, Iorg was primarily a role player appearing again as pinch hitter and spot starter. He again appeared in the posteason with the Royals, first in 1984 when Kansas City won the AL West and again the following season when they won their first and only championship. Iorg culminated a furious Game 6 rally with the Royals on the brink of elimination, a game famous for the Don Denkinger "safe" call on Jorge Orta's ground out. He was a free agent following the season, but owner's collusion at the time prevented him from getting serious offers. He signed with the San Diego Padres for his 10th and final season in 1986. Today, he is a salesman with Capital Lumber Company in Salt Lake City as well as working for a health supplement company.

Why I love this card
Post this card in the "I have no idea how to pronounce his name" category back when I got it. For weeks, I called Dane "EYE-ore-Guh." Bonus points for a shot of the Cardnals uniform numbers on the sleeves. Double bonus points for the extensive list of Iorg's minor league career on the back.

Something else....
I still vividly recall Iorg's hit in the World Series. For some reason, that hit is not as famous as some of the other Series moments from this generation. I also recall that when Iorg was interviewed immediately following the game he either had a bloody nose or mouth when he was smashed in the face during the postgame hoopla.
Posted by Dean Family at 11:56 PM