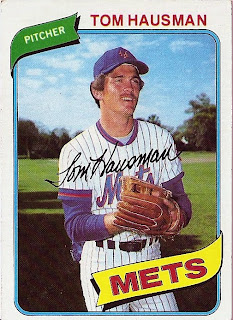 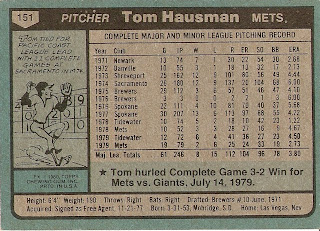 Who is this player?
Tom Hausman, relief pitcher, New York Mets
Pitching primarily out of the bullpen in 1980, Hausman appeared in a career high 55 games, winning six with a 3.98 ERA. Used in a variety of relief roles, the righthander was most often used as a setup man to closer Neil Allen. A season highlight came in July when he struck out a career high seven batters in a rare spot start against the Astros. Hausman made national headlines in August when he gave up Pete Rose's 3,500th career hit.

Hailing from South Dakota, Hausman was an All-State basketball player in high school and was signed by the Milwaukee Brewers as an 18-year old in 1971. After a mixed minor league career, Hausman made the Brewers major league pitching staff in 1975. He began pitching out of the bullpen and earned a spot in the rotation in the second half of the season. His season was limited to a back injury and his future at the major league level was uncertain. Indeed, Tom only appeared in three early season games with Milwaukee in 1976 before being farmed out for the season at Triple-A Spokane.

Hausman spent the entire 1977 season in Spokane as a starting pitcher winning 13 games but was not promoted to the Brewers roster. At the end of the season, he was declared a free agent and on November 21, 1977 became the first ever free agent signed by the New York Mets. He split the 1978 season between the Big Apple and Triple-A Tidewater. He appeared in ten games for the Mets (all starting assignments) splitting six decisions and finishing with a 4.70 ERA. 1979 similarly began in the bushes while also suffering an ulcer problem. Tom was called up to the Mets for good in June. He performed very effectively as a swingman for a pitching-poor Mets team that lost 99 games in '79.

After his breakout 1980 season, Hausman was slowed by an elbow injury in 1981, and made only 20 relief appearances for the Mets. In his limited work, he posted an excellent 2.18 ERA and walked only seven batters in 33 innings of work. The injuries persisted in 1982 as his elbow injury was also compounded by shoulder problems. He was traded to the Atlanta Braves for the Braves NL West stretch drive, but appeared in only three games. It would be the last season in his seven-year major league career.

Hausman was signed by the Pirates for the 1983 season but spent the entire season in the minor leagues. After missing the 1984 season, he attempted a short-lived minor league comeback in 1985 before finally calling it quits. Today, he has residences in Las Vegas as well as his native South Dakota.

Why I love this card
Over time, I have come to appreciate the simplicity of these Spring Training shots. As a kid, I gravitated more towards the action shots of this set, but photos such as Hausman's connect on a more subliminal level. Yes, here is a major leaguer in a major league uniform but he appears to be at a diamond in a park anywhere in the country. It could be yours. The line between reality and fantasy is blurred and that's what its all about when you're nine. Or 38 and collecting cards again.

Something else....
What the heck is in Hausman's back pocket? There is obviously something blue behind him and I can't quite make it out. Batting gloves? Stirrups? A kerchief? OK, I just wanted to work in "kerchief" somehow.
Posted by Dean Family at 5:31 AM