As voted on by the reader of this blog, the 1980 version of the Cecil Cooper card was unanimously selected as the better card. Must be the mutton chops. For those of you keeping score, that's one for the Topps Fan Favorites and one for the 1980 base set.

Up for your consideration this week in Houston Astros legend J.R. Richard. Already featured in this blog as card #50, J.R. was also given a Topps Fan Favorite card in 2005. These cards are remarkably similar, in fact they appear that they could have been taken at the same game. 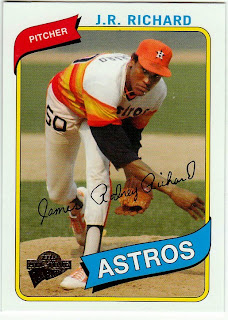 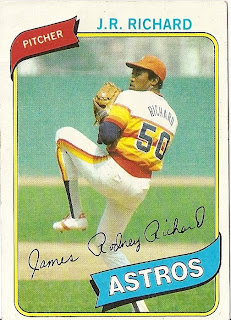 I have an inkling that this one may be close. Voting booth on the right.
Posted by Dean Family at 9:47 PM