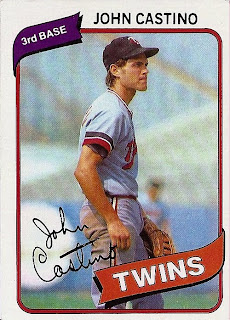 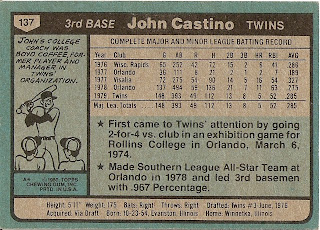 Who is this player?
John Castino, third baseman, Minnesota Twins
As the reigning American League Rookie of the Year (with Alfredo Griffin), John Castino entered his sophomore season in 1980 as one of the bright stars in the American League. A righthanded line-drive hitter, in 1980 he made big strides in hitting. His .302 average led the Twins regulars. He also topped the club in hits, runs and RBI. He had exceptional range at the hot corner and was being known for a strong, accurate arm. At 25, it appeared that Castino would be a baseball star for some years to come.

John Castino attended and played baseball for Rollins College, a private university located in Winter Park, Florida, where he was named Florida College Player of the Year in 1976. He was drafted by the Minnesota Twins in the 3rd round of the amateur draft a few months later. After three years working up the chain, he made his debut on Opening Day 1979. He worked his way into the starting lineup in May and he finished the year with a solid .285 average and leading all AL third basemen in double plays.

Coming off his 1980 season, he led the league in triples during the strike-shortened 1981 season and was second in sacrfice hits. Even though his batting average dipped to .268, it was still the best on his team and he led the Twins in hits. After the season, he had spinal fusion surgery to correct a sore back. Despite his solid play, the Twins had a prospect named Gary Gaetti ready to take over at third base and Castino was moved to second in 1982. He made only two errors at second base in 1982 but he struggled at the plate, primarily due to recurring back woes.

In 1983, Castino again had a solid season in the field at second base and he raised his batting average 30 points. He also achieved career highs in at-bats, doubles and runs scored. However, he began to experience back pain again and early in the 1984 season, and was placed in a body cast. He tried to recuperate with rest and then a second surgery. He remained on the Twins roster until 1985 when he was unable to come back, ending his six-year career.

Why I love this card
This card is Castino's rookie card. He is pictured here at Toronto's Exhibition Stadium. It was always fun to try and guess what stadium certain players were photographed. Exhibition Stadium was not a common venue but certainly a recognizable one. The weird configuration in right field was a common reminder that you were not in a baseball stadium. I once sat in the first row along the first base line in right field and my seat faced away from home plate. That tells you all you need to know about the CNE. By the way, would this card qualify as a Boyd Coffee rookie card?

Something else....
Castino went back to college after his playing days, earning an MBA from the University of St. Thomas. In 1987, he became an investment advisor and is currently Senior Vice President at Wealth Enhancement Group in Wayzata, Minnesota.
Posted by Dean Family at 3:04 PM