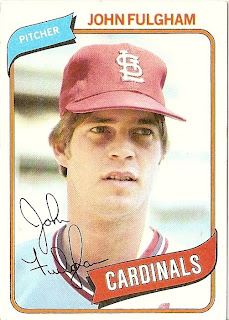 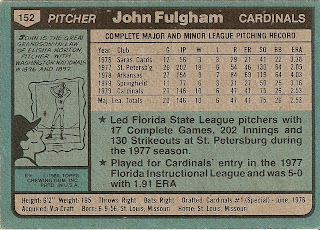 Who is this player?
John Fulgham, starting pitcher, St. Louis Cardinals
Beginning the season as the #3 starter in the Cardinals rotation, the 24-year old Fulgham was regarded as one of the best young pitchers in the league. He pitched a complete game four-hitter against the World Champion Pirates in his second start and had pitched 23 consecutive scoreless innings over May and June. Fulgham began to experience shoulder trouble and got into a scrape with teammate Keith Hernandez. He went on the disabled list, returned in August and did not pitch well before being shut down for the season. When the season ended, he was diagnosed with a torn rotator cuff.

John Fulgham was born in St. Louis and was a prep star at Pattonville High School in Missouri before moving on to the University of Miami. He was drafted by the Cardinals in 1976 and began to work his way up the minor league ladder. Fulgham became a top prospect in 1977 when he won 18 games with a 2.05 ERA in A-ball at St. Petersburg.

He began the 1979 season with Springfield, winning six games before being promoted to the Cardinals. John made his big league debut on June 19 and pitched a complete game shutout. He was the Cardinals best starter from that point forward and each of his ten victories that season were the complete game variety. Overall, he went 10-6 with a 2.53 ERA and ranked seventh in the league in complete games. Despite finishing second among rookies in wins he did not receive a single vote for the Rookie of the Year.

Upon receiving the diagnosis of a torn rotator cuff, he first tried rest before opting for surgery in 1981. He sat out the entire season before attempting his comeback in 1982. Unfortunately, the comeback was not successful and he never returned to the major leagues, ending his two year major league career.

After his playing days, he was the head baseball coach for Rollins College in Florida from 1992 to 1994. He also returned to school and earned his B.S. and an M.B.A. from California Coast University. After spending many years as a financial consultant and advisor, today John is the senior vice president at Rochdale Investment Management.

Why I love his card
The connection to Fulgham's great-grandfather in-law in the cartoon on the reverse. Not only is the ancestry angle kind of neat but I distinctly remember looking at the depiction of the old 1800's player. The mustache was just like Rollie Fingers and the pillbox hat was just like the Pittsburgh Pirates. The more things change....

Something else....
A torn rotator cuff was a death knell for pitchers during this era. Unlike today where the surgery has become very common and pitchers make a return to the mound, back then it almost never happened. In addition to Fulgham, contemporaries Steve Busby, Don Gullett, Doug Rau, Wayne Garland, Mark Fidrych all lost their careers to the torn rotator. Between that injury and substance abuse, it is interesting to think how differently shaped this period in baseball could have been.
Posted by Dean Family at 11:08 PM