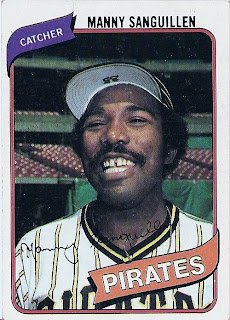 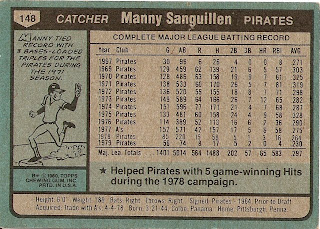 Who is this player?
Manny Sanguillen, pinch hitter, Pittsburgh Pirates
While the position flag on this card shows Manny Sanguillen as catcher, he did not appear behind the plate at all during 1980. Used mainly as a pinch-hitter, he reached a milestone by getting his 1500th career hit. Manny also appeared in five games at first base, including the final game of the season. In what would also be the final game of his colorful 13-year career, the popular veteran received a appreciative farewell from the Pittsburgh fans. Though he was included in a winter trade with Cleveland, the Indians were unable to coax him out of retirement.

Born in Panama as Manuel De Jesus Sanguillen Magan, Manny Sanguillen was an aggressive, free-swinging hitter that hit over .300 four times when that was highly unusual for a catcher. He three times placed in the league's top ten in triples and was consistently one of the toughest hitters in the league to strike out. But Sanguillen wasn't solely an offensive threat. He possessed a powerful and accurate throwing arm and was one of the toughest catchers to run on in the National League. However, in an era of Johnny Bench and Carlton Fisk, he was often overlooked. Even on his own team, he was in the shadow of Willie Stargell and his friend Roberto Clemente.

"Sangy" was a leading batsman on the Pirates when they were known as "The Lumber Company." He hit .303 in his first season as a regular (1969) and .325 the following year as the Bucs won the National League East. When the Pirates won the 1971 World Championship, Sanguillen was named an All Star for the first time and he was sixth in the league with a .319 average. The Pirates again qualified for the postseason in 1972 and by this time Sanguillen was an established All Star and MVP candidate.

When his dear friend and teammate Clemente tragically died after the 1972 season, Sanguillen was slated to take his place in right field. The emotional toll of the loss wore down Sanguillen as his batting average dropped to the lowest it had ever been as a regular. He returned to catching midway through the 1973 season. Nonetheless, Sanguillen was a popular fan favorite in Pittsburgh as the Pirates again made the postseason in 1974 & 1975. Manny collected 28 hits in postseason play and was a .282 hitter in seven separate postseason series.

At the conclusion of the 1976 season, Sanguillen was traded to the Oakland A's for manager Chuck Tanner. It remains the only time in baseball history that a player was ever traded for a manager. He spent only one season in Oakland, where he led the team in hits, at bats and games played and returned to the Pirates in another trade at season's end. He was primarily a pinch hitter in his final three seasons with the Pirates, a highlight coming in the 1979 World Series. In Game Two, Sanguillen's clutch pinch-hit in the ninth inning won the game for the Bucs and evened the Series. Manny would earn another World Championship when the Pirates won in seven games.

Why I love this card
Outside of Alfred E. Newman, only Manny Sanguillen was more famous for his gapped teeth. At least to me. Look at that great smile! Doesn't it scream "What Me Worry?" Indeed it seemed like every year, Topps pictured Sanguillen smiling. I got to see him this year at PNC Park, where he runs "Manny's BBQ". Unfortunately, I didn't have any cards of him to sign and I (my son) didn't want to wait in line.

Something else....
When I was in grade school, one of the books in the very limited sports section at St. Peter's School was Manny Sanguillen - The Jolly Pirate. It was one of those short kid biographies that I must have borrowed ten times during my schooling and I have never seen it since I was a kid. I guess that would explain a lot. Nonetheless, I remember reading the haunting image of Sanguillen diving into the ocean to desperately find Clemente before giving up the search after seeing sharks swimming around the area. Then and now, I can't imagine a major leaguer today doing anything like that.
Posted by Dean Family at 2:31 PM