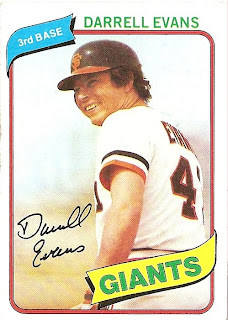 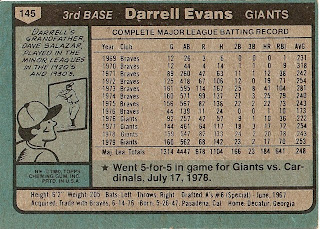 Who is this player?
Darrell Evans, third baseman, San Francisco Giants
The team captain of the Giants, the lefthand hitting Darrell Evans had a memorable year in 1980. He entered the record books early in the season when he committed three errors in one inning and achieved another milestone when he hit his 200th home run. Typically appearing near the top of the Giants batting order, Darrell turned in a solid 1980 season. In all, the durable and reliable Evans appeared in 154 games, had the most hits in one season in seven years, and clubbed 20 home runs.

The son of an athletic family, Evans first signed with the then Kansas City A's in 1967, fresh from the campus of Pasadena City College. Evans hurt his right arm in his first full season, 1968, trying to come back too soon after six months in the Marine Corps reserve. The Braves drafted him off the A's roster the following year. Evans didn't make it to the big club for good until late in the 1969 season as the Braves won the NL West. It was about this time that he acquired the nickname he retained for quite some time, "Doody" based on his resemblance to Howdy Doody.

By 1971, Evans won the full-time third base position, and began to show power. In 1973, he hit 41 homers, joining teammates Davey Johnson (43) and Hank Aaron (40) as the only three teammates in history to hit 40 or more homers in a single season. Evans' manager Eddie Mathews (a Hall of Fame third baseman) worked diligently to improve Evans' fielding at third, something Evans still credits Mathews with today. He even set a record by participating in 45 double plays in 1974. He never matched the power output of 1973, but did lead the league in walks in two consecutive years (1973-74). In 1976, he was batting only .173 when the Braves traded him in June to San Francisco where he spent the next 7 1/2 years and hit 142 home runs.

In 1983, Evans made the NL All-Star team and hit 30 home runs in what would be his final season with the Giants. During the offseason he became the Detroit Tigers' first high profile free agent and he paid immediate dividends when he smashed home runs on Opening Day and in the home opener. The Tigers roared to a 35-5 start and won the World Series in 1984. The following year, Evans became (at the time) the oldest man to lead the league in home runs when he hit 40 home runs at 38. Despite his advanced age, he was still a formidable bat in the Detroit lineup during his Tiger tenure, also helping lead the Tigers to the 1987 AL East flag. That year he hit 34 HR and had 99 RBI as a 40-year old, a remarkable feat for its time.

The Tigers did not resign him following the 1988 season and he returned to Atlanta in 1989 to wrap up his 21-year major league career. He finished with 414 career home runs and was eighth all time in walks when he retired. Bill James wrote that Evans was probably the most underrated player in history. After his playing days, he held several different coaching positions both at the major and minor league level. Today, he is the manager and director of player personnel for the Victoria Seals of the Golden Baseball League.

Why I love this card
When I first obtained this card in 1980, I am sure I had no idea who Evans was. As the decade wore on, he became one of my favorite players, especially during his time in Detroit. I don't ever remember him being called "Doody" as the Tigers referred to him as "Dad." I was such a fan that my family would go to great lengths - my sister once waited for Evans outside the men's room at a Friendly's restaurant to get his autograph on a napkin.

Something else....
I have so many regarding Evans. The standing ovation the day after he was picked off third in the 1987 ALCS. That he was on base when Hank Aaron hit #715. How big a deal it was when he became the only man in the first 90+ years of the game to hit 40 HR in each league. But I'll go with Evans' famous UFO sighting in 1982 that he credits with turning around his career. You can read more about that here.
Posted by Dean Family at 6:46 PM