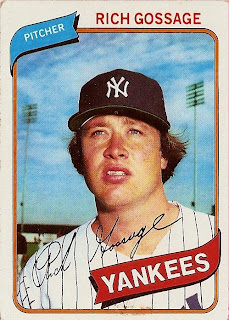 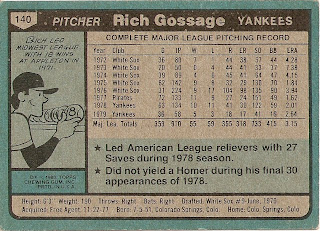 Who is this player?
Rich Gossage, closer, New York Yankees
Hall of Fame, Class of 2008
One of the most dominant short relievers in the history of the game, in 1980 "The Goose" had perhaps his finest season. The intimidating righthander led all of baseball with 33 saves as the Yankees won the AL East for the fourth time in five years. He slammed the door most definitively in the second half when he earned a save in 17 of his last 22 appearances, including nine in a row. Goose finished third in the MVP and Cy Young voting at the end of the year. This season would be one example Gossage's supporters pointed to when making his case for the Hall of Fame.

Born and raised in Colorado, Gossage was selected by the Chicago White Sox in the 1970 amateur draft and was in the major leagues in a little over a year. He earned his famous moniker from former White Sox roommate Tom Bradley, who said he looked like a goose when peering in to get the sign from his catcher. His first season, 1972, he went 7-1 with 2 saves, and an ERA of 4.28. By 1975, he became the White Sox top fireman, getting a league-leading 26 saves and being named to his first All-Star team. The next year, though, he was used as a starter by manager Paul Richards and lost 17 games. When the season ended, he was traded to the Pittsburgh Pirates.

Goose only spent the 1977 season in Pittsburgh where he was third in saves and again an All Star. He signed with the defending World Champion Yankees as a free agent prior to the 1978 season and his presence immediately threatened reigning closer and Cy Young winner Sparky Lyle. Goose quickly established himself as the new stopper as he closed out the AL East playoff, the ALCS and World Series as the Yankees repeated as champions. Gossage, meanwhile, was honored as the Rolaids Relief Man of the Year. His 1979 season was cut short when a locker room fight with Cliff Johnson resulted in a broken thumb.

Gossage continued his dominance in the truncated 1981 season, posting a microscopic ERA of 0.77. The Yankees again made it to the postseason, but lost the World Series to the Dodgers. As with most Yankee stars of this era, he had his run-ins with the press and owner George Steinbrenner and when his contract expired at the end of the 1983 season, he signed with the San Diego Padres. He helped lead the Padres to their first ever league pennant and the 1984 World Series. Unfortunately, San Diego fell to the Tigers 4 games to 1. After another spectacular All-Star season in 1985, Goose's effectiveness as a closer began to wane. He was traded to the Chicago Cubs at the start of the 1988 season.

He bounced around in the final years of his career, with five major league clubs and even one in Japan. He found new life as a setup man with the A's, Rangers and Mariners in the early 1990s. During this period, the still formidable Goose could still be called upon to close out a game or two. His final season was 1994 and he retired after 1002 games, 310 saves and 22 seasons in the majors. After eight years on the ballot, Gossage was finally elected to the Hall of Fame in 2008. Parts of his speech can be found here. It also earned him an appearance on David Letterman, here.

Why I love this card
While I'm not a fan of the simple head shot, here is Gossage without his classic Fu Manchu. In his Yankee years, this is the only shot of Gossage's face as all the others show him pitching. That makes it somewhat historic, I guess. Gossage discusses the origin of the Fu Manchu here. Goose also discusses the "Pine Tar" home run at that link. Finally, Topps did not make a single card of Gossage during his playing days where he was referred to as "Goose" on the front.

Something else....
I must say dear readers, at this point in the blog I am somewhat disappointed. Over the weekend, this card cameo my possession: 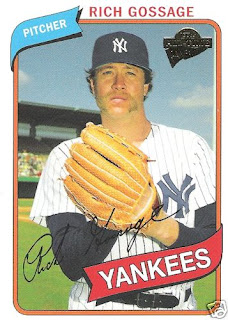 Needless to say, imagine my shock/dismay/joy upon seeing this and a couple other similar looking 1980 vintage cards. I was never even aware of this! Now, my absence from the card collecting scene and ignorance of the current product is pretty established. I was told by the vendor about the "Fan Favorite" cards earlier this decade, but I cannot find any information (how many were made in 1980 style) or a checklist(s). I'll give Topps this much - they did improve on the 1980 Gossage as this is certainly a better photo. I can't say the same about Cecil Cooper, featured earlier. His 1980 chops are way better. 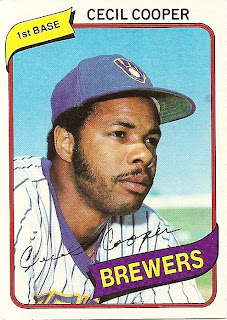 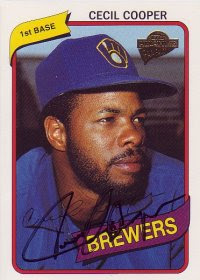 Can anyone else provide information about these "Fan Favorite" cards? I'll feature them as I go along if I know who/what is out there.
Posted by Dean Family at 10:23 PM