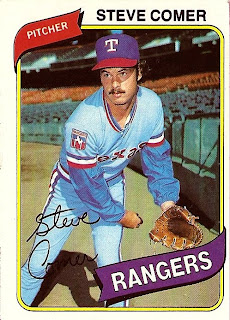 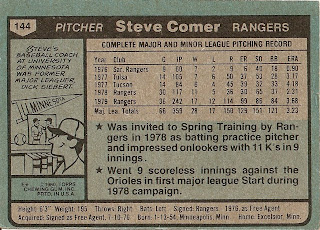 Who is this player?
Steve Comer, starting pitcher, Texas Rangers
As the 1980 season began, Steve Comer was part of a crowded situation in the Texas Rangers' starting rotation. With six serviceable starters, the righthanded Comer was expected to fill the bill as the #3 starter due in large part to his 17 victories in 1979. He began the 1980 season poorly, losing three of his first four decisions, with an ERA hovering around 10.00. A sore shoulder sidelined him for much of the June and when he returned a month later, his performance didn't improve. His season ended in late July with a 2-4 record and 7.99 ERA.

A product of the University of Minnesota, Comer compiled a 30-9 record as a Golden Gopher yet was not drafted by any major league team. He was working in construction picking up scrap lumber when the Rangers signed him as a free agent in 1976. Armed with an devastating changeup, he won seven games and posted a 0.90 ERA in rookie ball and was promoted to Triple-A the following year. He made the Rangers staff out of Spring Training in 1978, and he began the season in the bullpen. Comer was very effective in that role and earned a look in the starting rotation.

In his first major league start, he pitched nine innings of shutout ball as the Rangers defeated the Orioles. In his fourth start, he returned to his home state of Minnesota and shutout the Twins. He finished the 1978 season 11-5 with a 2.30 ERA and had began the 1979 season as the Rangers #3 starter. He won 17 games that season, no other AL righthander won more. He also led all Ranger starting pitchers with a 3.58 ERA. Comer clashed with management as well during 1979, openly criticizing Rangers ownership in the media.

With his shoulder healed in 1981, Comer was moved to the bullpen by new manager Don Zimmer and excelled as a setup man and sometimes closer. The thought was that pitching in relief would cause less strain on Comer's shoulder. The move worked as he won eight games, saved six and crafted a 2.56 ERA. However, the inability to develop another pitch to compliment his great changeup would eventually lead to a disastrous 1982. He gave up 133 hits in just 97 innings and his ERA shot up nearly three whole runs to 5.10. At the end of the season, Comer was released by the Rangers.

In 1983, he was signed and released by the Yankees before Opening Day and then signed and released by the Mariners in June. In both cases, he did not appear with the major league club and he was unimpressive. He appeared in only three games with the 1983 Phillies, but was released yet again. He had one last season in the majors, 1984 when he appeared in 22 games with the Cleveland Indians, ending his seven-year major league career. Today, Comer is involved with MetroMark a Electroluminescent Lighting company. Their website is here. He was also known to play occasionally in the Minnesota Senior Men's Amateur Baseball league.

Why I love this card
The jacket that Comer is wearing underneath is jersey. I always felt like an idiot when my Mom would make me wear a jacket playing baseball so when we saw the players on cards do this, we followed suit. Granted we didn't look as cool as a major leaguer, but at least our jerseys were showing. Bonus points for Comer almost daring us not to look at the state of Texas patch on his sleeve. It originally began as a Texas bicentennial patch in 1976, but the Rangers carried it well into the 1980s.

Something else....
I found this blurb about Comer on the net, cannot verify its accuracy, but thought it was funny:

In 1981, relief pitcher Steve Comer became Don Zimmer's closer, but had one very bad day. First, a practice ball ricocheted off a batting cage and into his mouth, busting a couple of teeth. That night, while waiting at a DFW Airport bar for a flight to the next road game, Comer ordered a drink with actual fire on top. He spilled the flaming concoction on his face, in turn torching his beard.