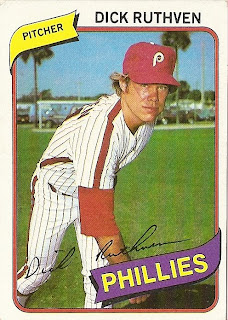 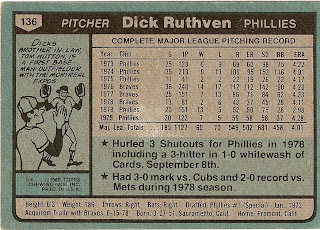 Who is this player?
Dick Ruthven, starting pitcher, Philadelphia Phillies
As the 1980 season began, Ruthven was one of the many question marks on the Philadelphia Phillies. He raced off to a 6-0 start in 1979 before elbow trouble wiped out his season and the Phillies finished a disappointing fourth. He answered the critics in 1980. He was healthy and emerged as the #2 starter on the club behind Steve Carlton, finishing the season with a career-high 17 wins. The Phils NL East and NLCS in dramatic fashion on their way to the first world title. In the postseason, he won in relief the Game 5 NLCS clincher and went nine innings in a no-decision in Game 3 of the World Series.

The first pick of the Philadelphia Phillies in the secondary phase of the 1973 amateur draft, the righthanded Dick Ruthven made his major league debut on April 17th without making a stop in the minor leagues. He had little success as a temperamental young starter with the Phillies, finishing with a losing record his first two seasons and demoted to the minors in 1975. After the '75 season he was traded to the Chicago White Sox. He was with the organization for two days when Chicago traded him to the Atlanta Braves.

He came out of the gate quickly in 1976, winning 10 games in the first half and was named to the National League All Star team. He slumped in the second half, however, and led the league in losses. He again finished with a losing record in 1977 as he battled injuries and demanded to be traded. It was revealed that Braves' owner Ted Turner had made a "playful pass" at Ruthven's wife. The Braves accommodated him and traded him to back to the Phillies in June of 1978. He went 13-5 for the Phillies and helped the team reach the NLCS.

He was again named to the NL All Star team in 1981 when he again rode a hot first half to eight wins before the Player's Strike. However, he led the league in earned runs allowed and finished the year with a 5.15 ERA as the Phillies lost the ALDS to Montreal. When his former manager Dallas Green took over the reigns of the Chicago Cubs as their general manager, Ruthven was one many former Phillies he acquired for the Chicago.

Dick was the Cubs Opening Day starting pitcher, but 1984 began a downward slide in his effectiveness. Even though the Cubs would win the division, Ruthven would win only six games. His ERA also ballooned, rising to 5.04. Ruthven did not appear in the 1984 NLCS, which the Cubs lost in five games. He was a swingman in 1985 and appeared in only six games before the Cubs released him in May 1986. It was the end of his 14-year major league career. Today, Ruthven in enjoying retirement and his son is a soccer player at the University of South Carolina. His twin sister is married to former major leaguer Tommy Hutton.

Why I love this card
Wow, this pose is really similar to the very recent Matt Keough card. At least Keough is pictured in a major league stadium...it looks like they took this shot of Ruthven in a parking lot.

Something else....
After two years in the majors, Ruthven spent most of the 1975 season with the Phillies Triple-A affiliate, the Toledo Mud Hens. According to the Jim Bunning biography printed in 1998, Ruthven was not a Mud Hen fan. According to the book:

Ruthven felt so strongly about the name that he refused to tell anyone that he was a Mud Hen. If someone asked Ruthven what team he played for, Dick would make up a name or deny he was a baseball player. "I'll be damned if I'm going to admit I'm a Mud Hen," he would say.

What does this have to do with Bunning, you may ask? Bunning was Ruthven's manager in Toledo.
Posted by Dean Family at 6:39 PM